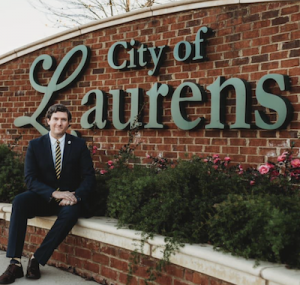 On Tuesday, June 1st Laurens Mayor Senn signed a proclamation recognizing June as “Alzheimer’s and Brain Awareness Month” in the City of Laurens.  He is “all in” to  #EndALZ and support all suffering from Alzheimer’s and other forms of dementia.

“As an attorney, I see the impact that Alzheimer’s has on families, and it can be difficult for them to deal with the legal consequences, particularly when the disease has advanced too far,” said Mayor Senn. “As Mayor, I frequently see the impact it has on individuals and their families, who feel the pain of not being recognized by someone they love so much.  And, it is far too common.  I believe anything we can do to raise awareness and show support for those affected by Alzheimer’s and other forms of dementia is just the right thing to do.”

Next week the trees on the square in Laurens will be lit with purple lights to signify the recognition of #EndALZ month. 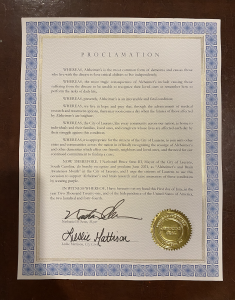 WHEREAS, Alzheimer’s is the most common form of dementia and causes those who live with the disease to lose critical abilities to live independently;

WHEREAS, the most tragic consequences of Alzheimer’s include causing those suffering from the disease to be unable to recognize their loved ones or remember how to perform the tasks of daily life;

WHEREAS, presently, Alzheimer’s is an irreversible and fatal condition;

WHEREAS, we live in hope and pray that, through the advancement of medical research and treatment options, there may soon come a day when the futures of those affected by Alzheimer’s are brighter;

WHEREAS, the City of Laurens, like every community across our nation, is home to individuals and their families, loved ones, and caregivers whose lives are affected each day by their struggle against this condition;

WHEREAS, it is appropriate for the citizens of the City of Laurens, to join with other cities and communities across the nation in officially recognizing the scourge of Alzheimer’s and other dementias which affect our friends, neighbors and loved ones, and the need for our continued commitment to finding a cure;

IN WITNESS WHEREOF, I have hereunto set my hand this First day of June, in the year Two Thousand Twenty-one, and of the Independence of the United States of America, the two hundred and forty-fourth.