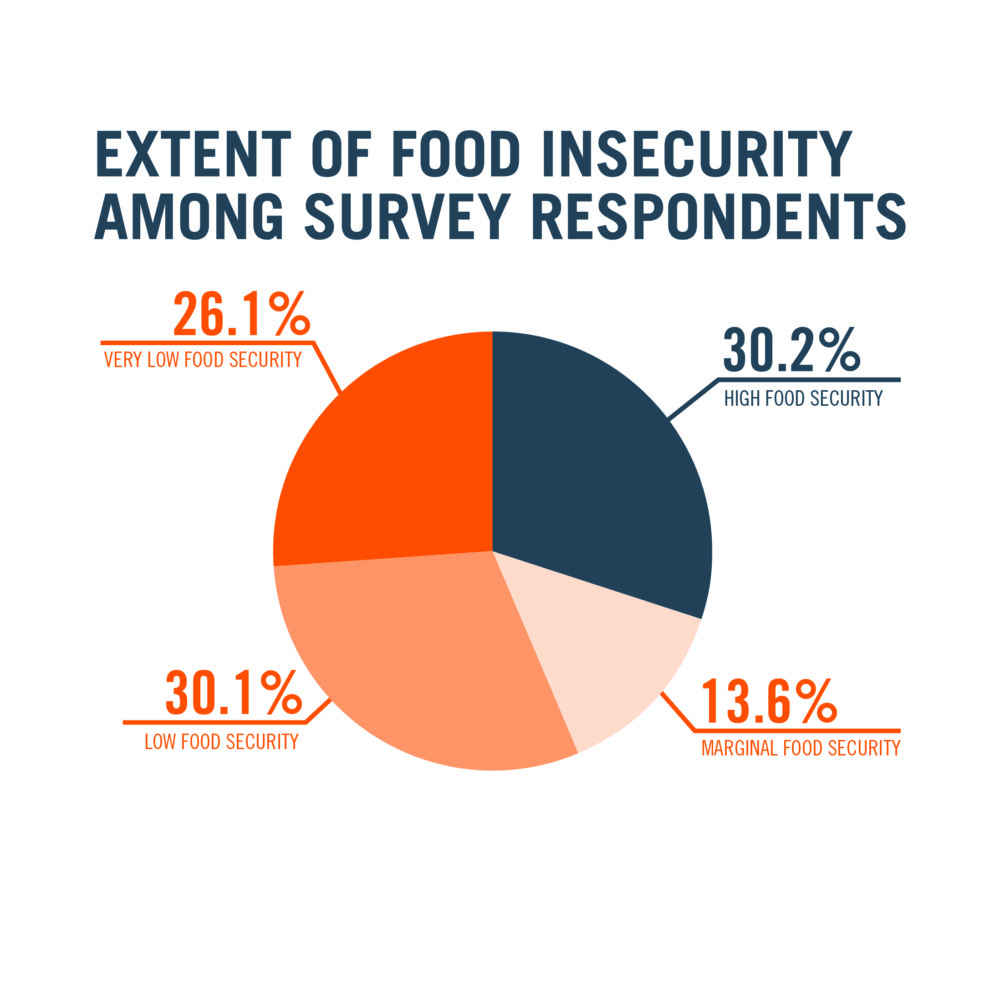 Approximately 70% of survey respondents indicated they experienced some level of food insecurity in the past 12 months, and experienced problems or anxiety about consistently accessing adequate food, including individuals experiencing marginal (13.5%), low (30.1%), or very low (26.1%) food security.

The results of the study are based on survey data obtained from 200 community members who are facing hunger and food insecurity as well as focus groups with community leaders, in-depth interviews, a survey of local churches, mapping of “food deserts” and a transportation study to better understand food access for community members who use the local transit system. The survey was given to individuals at various community agencies, including food banks and food pantries, in order to better understand the extent and nature of food insecurity among community residents. 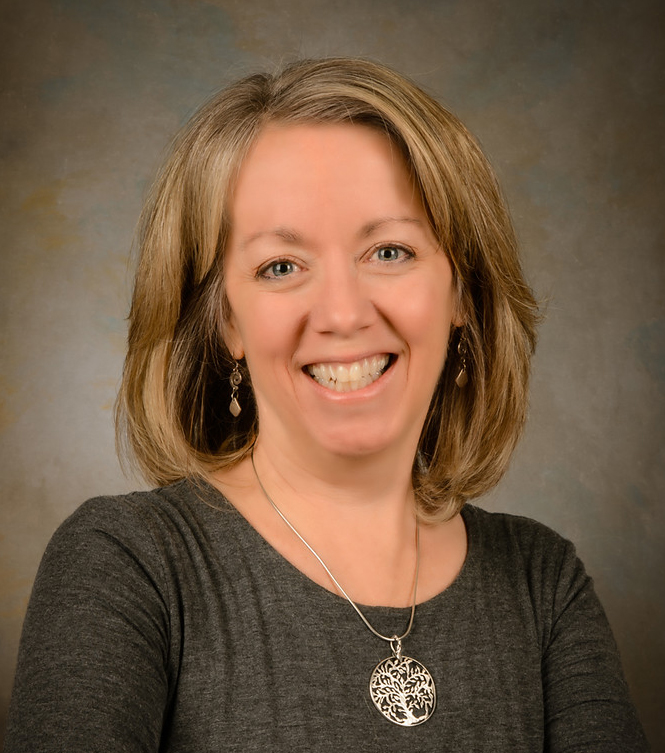 Catherine Mobley, professor in Clemson’s sociology, anthropology and criminal justice department, said the research team used the U.S. Department of Agriculture’s definition of food insecurity in the research, which is “an inability, at some time during the year, to provide adequate food for one or more household members due to lack of resources.” The purpose of the research was to discover just how many people are impacted in Pickens County and what barriers hold people back from obtaining the food they need.

“Individuals who face hunger struggle to make ends meet and often have to make difficult choices between meeting their basic food needs and paying for life’s other essentials, such as utilities, medical care and rent or mortgage,” Mobley said. “We wanted to look at many aspects of food insecurity and its causes from many different angles in order to paint a clear picture of the issue for the United Way of Pickens County.”

The research revealed just what the tradeoffs are for people who cannot afford food. Nearly 38 percent of respondents said that in the previous year, they had to choose between buying food and paying for utilities such as electricity. Fuel for vehicles and medical care came in at a close second and third at 31 percent and 30 percent, respectively.

The study also examined where people obtained food, the types of foods they prioritized and how they got to food sources. Almost 38 percent of respondents relied on a food pantry at least four times in the previous year, and respondents overwhelmingly reported that price and nutritional value were important factors in food selection. While many reported using their own vehicle to shop for food, more than half relied on rides from a friend or family member, 26 percent walked to get to food and just under 10 percent relied on public transportation.

“When our research team and the United Way of Pickens County better understand the problems this population faces, we’re then better prepared to enact solutions,” Mobley said. “Our results are powerful because we went straight to the people facing these issues, so any effort to address food insecurity needs to include them directly.” 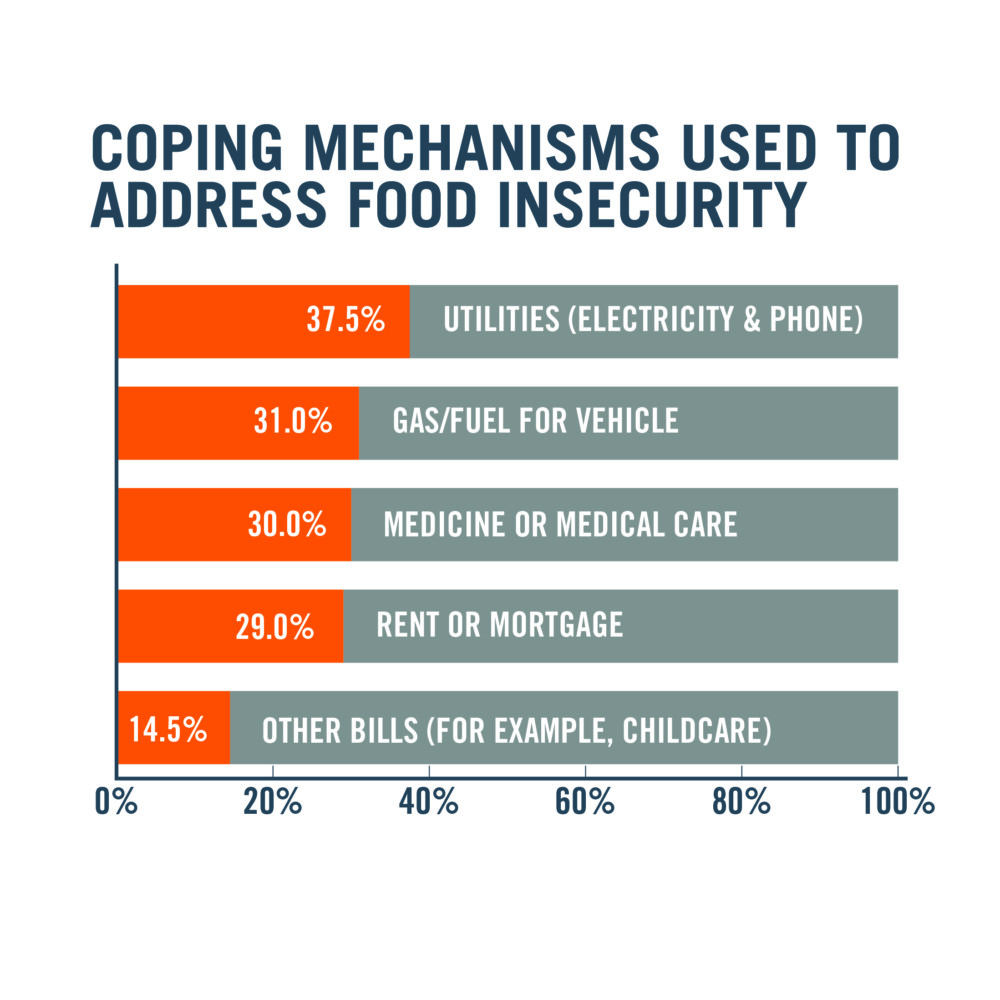 Participants were asked if, in the past 12 months, they or anyone in their household had to choose between buying the food they need or paying for any of the following, checking all that apply.

The research team recommends coordination between community groups that address poverty and hunger in the county. Getting all of these groups on the same page will go far in the development of inventories and resource guides for the county as well as the reduction of redundancy in combined efforts, according to Mobley.

Leslie Hossfeld, a researcher involved in the project and dean of Clemson’s College of Behavioral, Social and Health Sciences, said 87 percent of respondents are open to healthy, fresh food in the form of mobile markets that will bring better options to them. In the meantime, transportation options and bus routes need to be expanded for rural areas so that people can escape food deserts to access food.

“Expanding access to fresh food or improving people’s ability to get to it would be big steps, but both need to happen in the future,” Hossfeld said. “These are areas that are still feeling the effects of economic stress that started more than 10 years ago, and our research shows this population is ready to make the healthy choice if it’s available.”

According to Karen Culley, vice president of community impact for the United Way of Pickens County, it is disheartening to hear that hunger is still such a prevalent issue in the county. The organization realized that the issue needed to be examined in a more in-depth fashion following a hunger study conducted in 2011 in the area.

“Learning that citizens want increased access to fresh fruit, vegetables and all-around healthier eating options is a great thing to hear,” Culley said. “I believe this is an issue that the United Way of Pickens County can explore and work on addressing.”

Culley said that based on the research results, the organization will likely form a county hunger coalition made up of representatives from local service agencies, government, churches and others interested in tackling the issue of hunger. 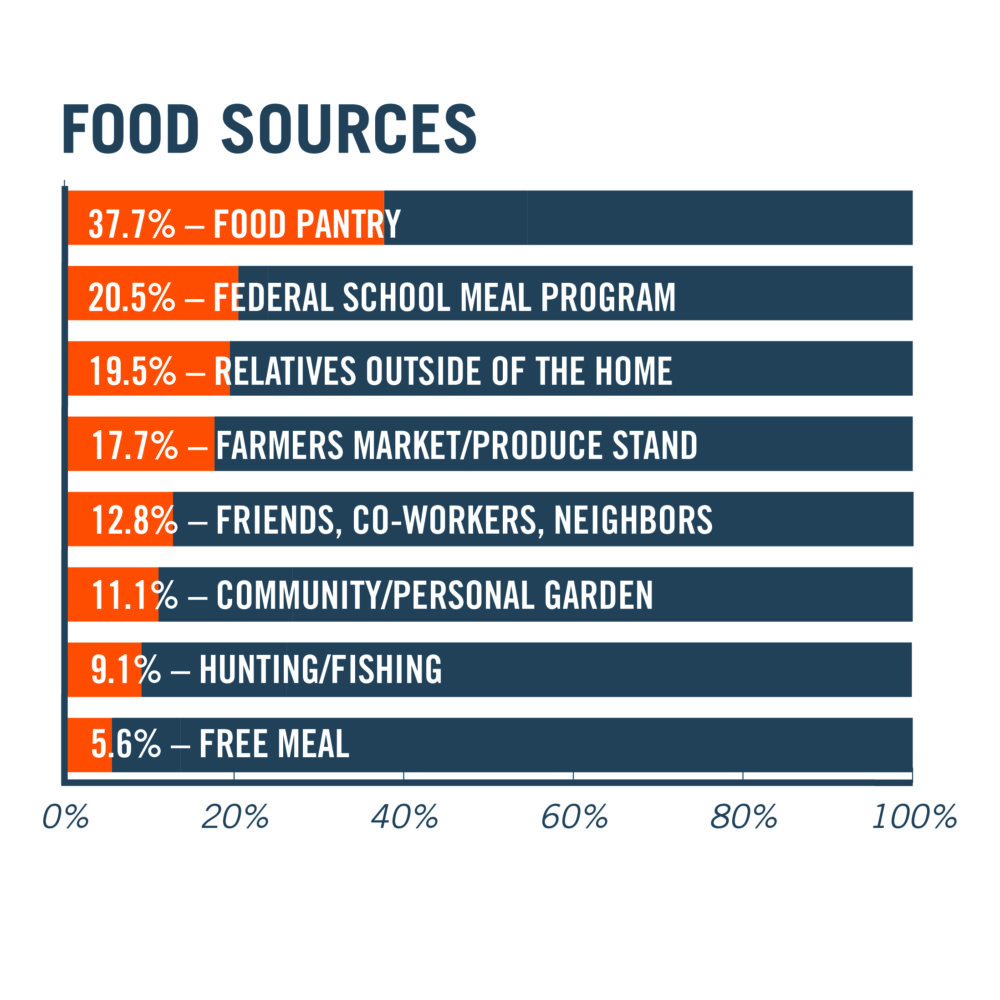 Participants said in the last 12 months their household depended on the following food sources from 4-6 times a year to once a month, choosing all that apply.

She said that over the next year, the coalition would examine the research, review all recommendations by the Clemson research team and make decisions on the best way to implement the recommendations. She said the United Way of Pickens County would be active in securing funding for programming and identifying partners to provide services.

The negative effects of food insecurity aren’t relegated to short-term hunger; the long-term health effects, especially for children, truly drive home how important this issue is to address, Hossfeld said. The food hardship rate nationally is higher for families with children. The child household food insecurity rate in Pickens County in 2017 was 16.4 percent, which equates to nearly 4,000 children affected.

“Food insecurity is entirely preventable, so to see children inherit it is tragic,” Mobley said. “Our research team’s hope is that, armed with more information, Pickens County can continue making steps to break this cycle.”