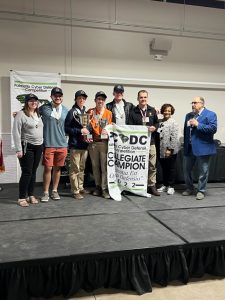 CU Cyber has extended its dominance in the Palmetto Cyber Defense Competition, underscoring Clemson University’s strength in the skills needed to excel in one of the nation’s most in-demand careers.

CU Cyber beat nine other teams this spring when they gathered for the competition at Exchange Park in Ladson. It was Clemson’s seventh first-place finish in 10 years.

The idea behind the competition is to promote cybersecurity education and awareness. In this year’s competition, teams defended a fictional currency exchange against digital pirates.

While the teams were pitted against each other in competition, they battle a common enemy in the real world. Hackers pose a growing threat as more services shift to the internet. In recent years, they have stolen personal information, held data for ransom and in at least one case took an entire nation offline.

The threats have made cybersecurity one of the nation’s most in-demand jobs. Total cybersecurity job openings number 597,767 across the country, including 6,066 in South Carolina alone, according to Cyber Seek.

In the heat of competition, Clemson’s victory was far from certain. The team was given default credentials to access the network, but they didn’t work, Fletcher said. From what he could tell, Clemson was the only team to have the problem. 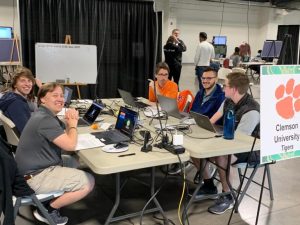 The one-day competition, held April 10, lasted about eight hours. The Citadel came in second in the collegiate division this year, and the U.S. Naval Academy took third. High school and professional teams competed in separate divisions on different days.

Hoyt said the competition helps team members practice situations similar to what they would face in a cybersecurity career.

“Clemson has done very well in the PCDC competition over the years,” Hoyt said. “This was the first year that this group of students has competed together in both the Southeast Collegiate Cyber Defense Competition and the PCDC competition. I was very impressed at how well they worked together. They didn’t go in with high expectations and approached it as a learning experience. In the end, I believe that really helped them do so well.

“Over the years, I’ve seen how these competitions help give students a competitive advantage when interviewing with companies. In fact, this year we had two former students that were helping run the PCDC competition.”

Fletcher said CU Cyber will be back next academic year. To learn more, go to the club’s website here.