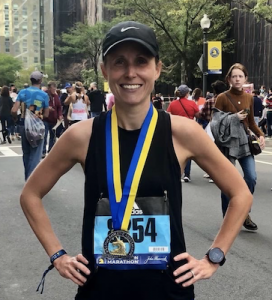 Running is not new for Fox.  She is a graduate of Presbyterian College (2009) where she also played soccer and says she enjoyed the running involved in the game.  After graduating she left the soccer field but kept running. 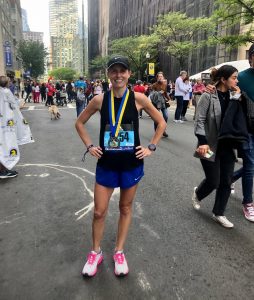 Running the Boston Marathon starts and finishes in one day, just a few hours actually.  But the training for that day takes months.  Fox started training at the beginning of June.  Her weekly mileage peaked at 68 miles per week, and she usually did 1-2 workout type runs and a long run per week sprinkling in a few easy runs the other days and taking one day off per week to rest.

Running the Boston Marathon is impressive. Running it twice is really impressive!

Fox first ran the Boston Marathon in 2013 and was near the finish line when the first bomb went off. She had just crossed the finish line about one minute before.  “I love running and I saw it as a challenge,” said Fox. “Having been there in 2013 and experienced the bombing firsthand, I understand how special this race is to runners.”

People travel to Boston from all over the world to participate in the event. The logistics of the race are challenging due to travel, staying in a hotel, eating out, a late race start, and a challenging course.

“The course is challenging but the bystanders and fans are amazing,” said Fox.  “They bring so much energy to the runners throughout the entire course.  It feels like one big victory lap in celebration of all your hard work to get there.”

Fox is originally from Greenville, South Carolina. She and her husband, Mark moved back to Clinton when they got married and have lived here for eight years. Fox is in her ninth-year teaching and her fourth year as a teacher at Clinton High School.

Why do you run, and why the Boston Marathon?  “Someone once told me that running teaches you to be comfortable with being uncomfortable,” said Fox. “That always resonated with me.  Seeking situations that are outside of your comfort zone is how you grow as a person.”

The Boston Marathon is the oldest annually run marathon in the world.

Some interesting facts about the 2021 race:

This year’s race was the first fall edition of the Boston Marathon, and first time the race was held outside of its traditional Patriots’ Day date in April. 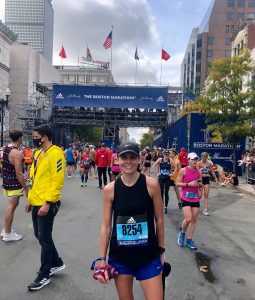 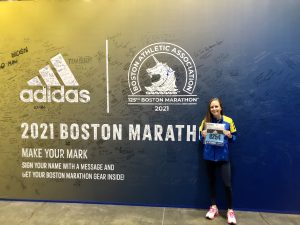 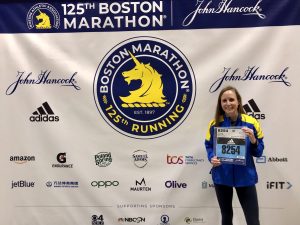