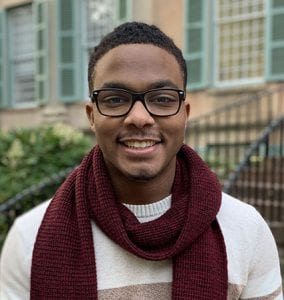 A College of Charleston student has been named a Goldwater Scholar, one of the nation’s highest honors for undergraduates studying science, technology, engineering or mathematics (STEM).

Molecular biology major Vernon Kennedy Jr. was among the 396 undergraduates that the Barry Goldwater Scholarship and Excellence in Education Foundation chose from a pool of 1,343 outstanding candidates to be awarded Goldwater Scholarships, which cover the cost of tuition, fees, books and room and board up to $7,500 per year.

Aiming to foster and encourage outstanding students to pursue careers in STEM disciplines, the Barry Goldwater Scholarship recognizes college sophomores and juniors who show exceptional promise of becoming the next generation of research leaders in their fields. Since 1989, a total of 7,921 students have received $63 million in Goldwater Scholarships.

And Kennedy – the College’s 13th Goldwater Scholar since 2013 – certainly fits the bill: The Honors College rising senior has presented his work both on and off campus, even receiving a Research Presentation Grant from the College to support his travel to Chicago last fall to present at Neuroscience 2019, an annual meeting hosted by the Society for Neurosciences.

“Both CofC and the Honors College have encouraged and supported my research tremendously,” says Kennedy, whom the Office of Undergraduate Research and Creative Activities recently awarded a Summer Undergraduate Research with Faculty (SURF) Grant to support his 2020 summer research. “The School of Sciences and Mathematics and the School of Humanities and Social Sciences have supported my travel to off campus meetings where I have gained invaluable professional experience.”

It all started at a School of Sciences and Mathematics Annual Research Mixer, where he learned about the work that psychology professor Jennifer Wilhelm was doing in her lab.

“I knew immediately that there was no other lab I wanted to be a part of,” he says, adding that it was the interdisciplinary nature of Wilhelm’s research that interested him. “Our lab uses both biology and chemistry, and our ultimate goal is to better human health.”

Specifically, Kennedy studies the effects that estrogen signaling and exercise have on spinal cord changes following peripheral nerve injury. And this research supports Kennedy’s future goals of pursuing an M.D./Ph.D. in either neuroscience or molecular biology, with the hopes of studying molecular treatments for neurodegenerative disorders.

“Discovering the mechanistic details behind this relationship would allow us to develop treatment protocols with the potential to benefit the thousands of patients impacted by these injuries each year,” he says.

Indeed – with the endorsement of a Goldwater Scholarship – Kennedy is well on his way to becoming one of the next generation’s leaders in research.