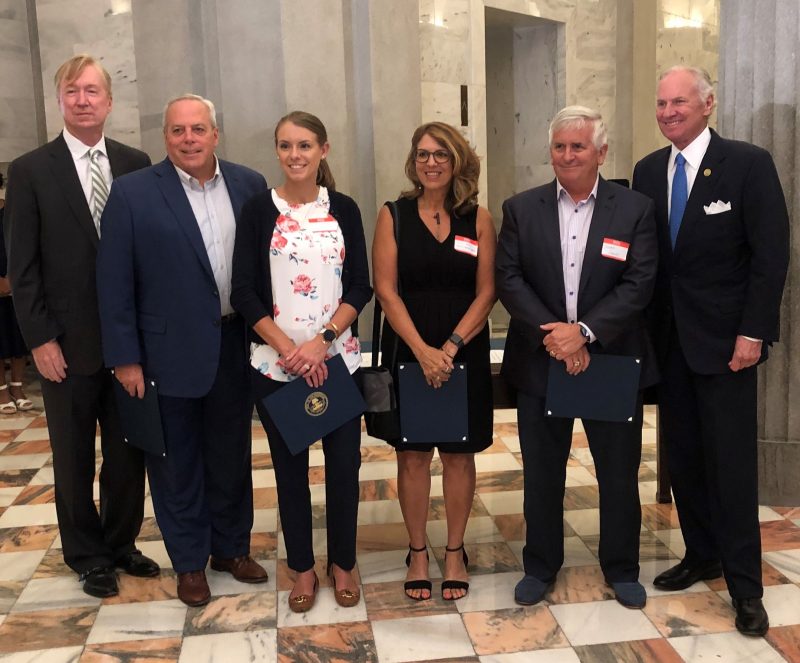 Columbia’s recently rehabilitated 1649 Main Street received an Honor Award at the 26th Annual South Carolina Historic Preservation Awards on Friday, July 23, 2021. The project team members behind the building’s recent adaptive reuse accepted certificates from Governor McMaster at a small ceremony at the South Carolina State House. Presented annually, the South Carolina Historic Preservation Awards are sponsored by Preservation South Carolina, the SC Department of Archives and History, and the Office of the Governor. Awards are presented in multiple categories including the Honor, Stewardship, Heritage Tourism, Preservation Service, Elected Official, and the Governor’s Awards. The 1649 Main Street team received the Honor Award in recognition of the project’s exceptional accomplishments in the preservation, rehabilitation, and interpretation of the state’s architectural and cultural heritage. Originally constructed in the late 19th century, 1649 Main Street is now home to Columbia hotspots Hendrix and The Woody. 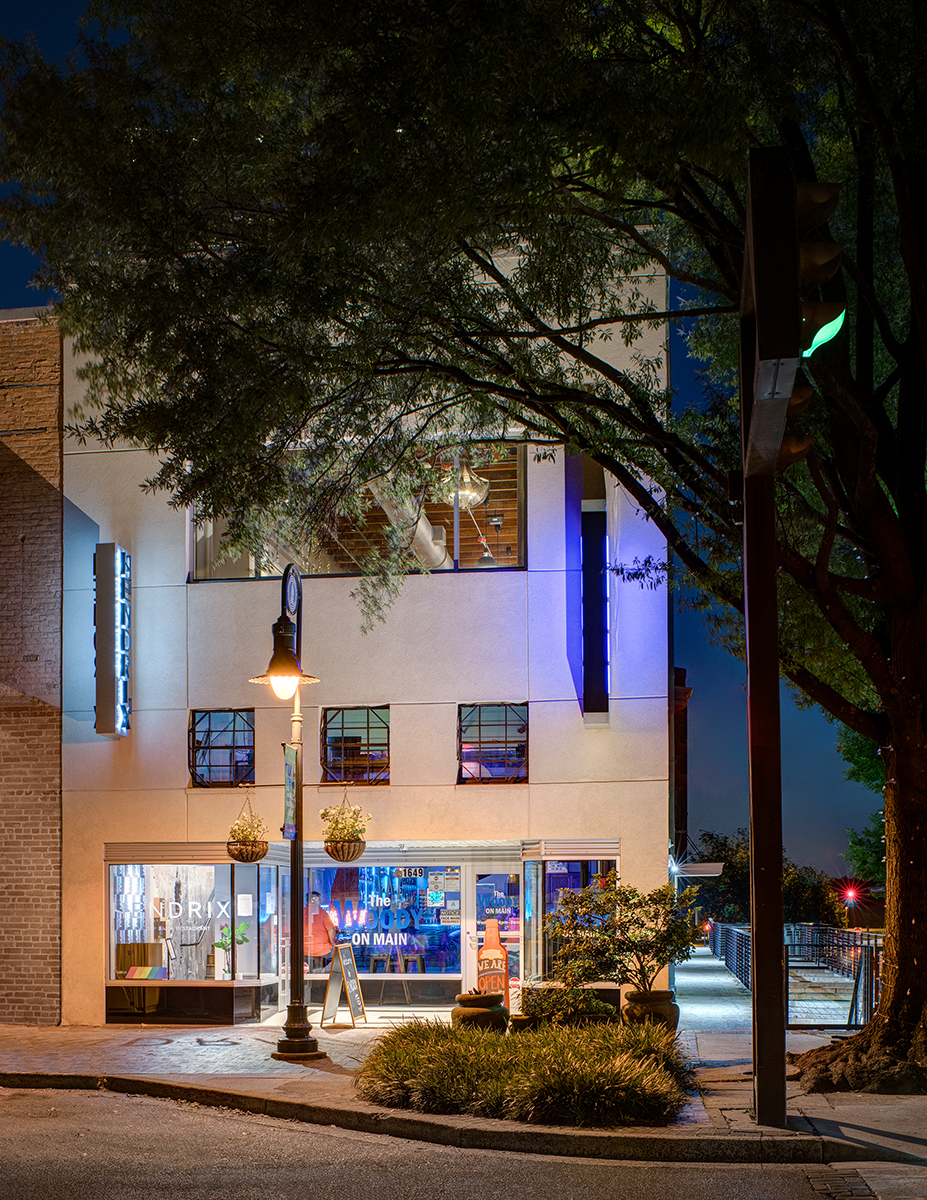 “This building just spoke to us. We knew it as Hennessey’s but we also knew it had a great future as something else.” said Scott Garvin, President of Garvin Design Group and a development partner with Main & Blanding LLC, “Our team was able to see past all of the crummy additions and imagine a much brighter future for the building that actually restored much of its original appearance.”

The project team looked to historic photographs and descriptions to inform design for its adaptive reuse. Historic newspaper photographs illustrated the building’s mid-20th century façade – the building’s rehabilitation restored its historic storefront system to match 1930s and 1940s images taken from Main Street. The original hard wood floors were restored in both the first and second levels. Removal of drop ceilings and the late 20th century mezzanine exposed the building’s historic trusses and pressed tin ceilings. Site work included removing sections of the sidewalk on Blanding Street to restore the property’s historic grade and provide daylight to the basement level, rendering this space useful to new tenants. A decking system preserved the historic roof structure and created a new rooftop bar with great views of downtown. 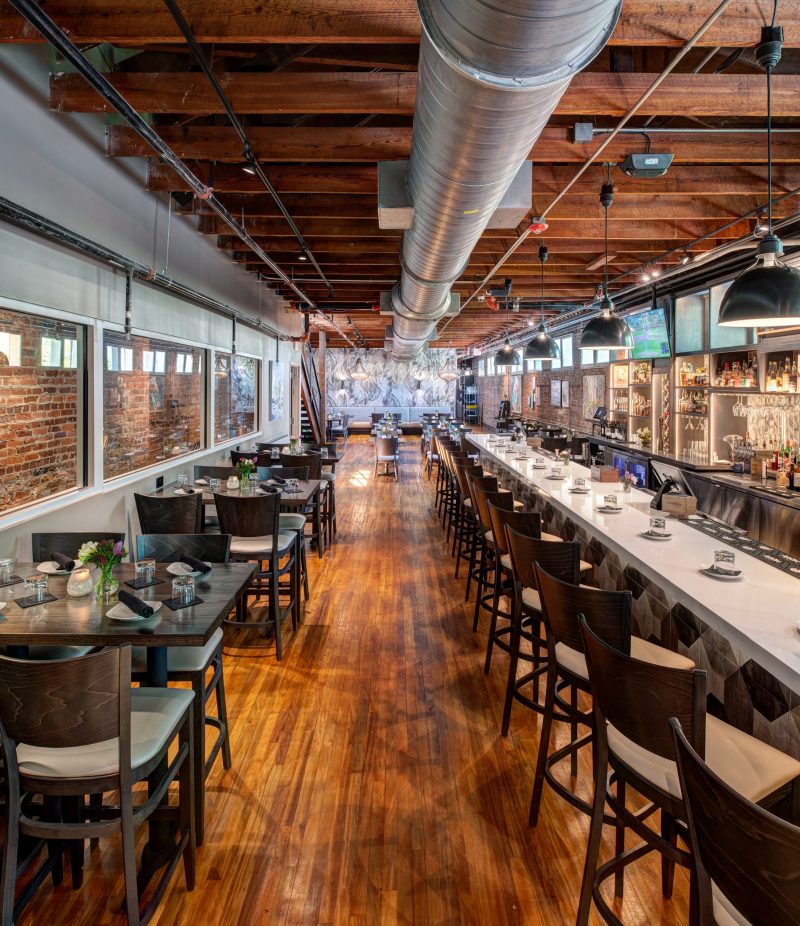 “Every historic building presents a unique set of challenges, and this one was no different,” said Amanda Harter, Hood Construction Project Manager, “This one challenged us to think creatively about how to best preserve the existing roof and basement structures while adapting them for new uses. It’s been really amazing to see how this building’s rehab has added life to the whole block north of it.”

Rehabilitation of 1649 Main Street has had an important economic impact on the local community as well. The building’s new tenants – Hendrix and The Woody – won The Columbia Chamber’s Golden Nail Award in 2020 and 2021, respectively. The Golden Nail Award is given annually to businesses and property owners which exhibit exemplary contributions to the physical character of the greater Midlands area through cosmetic or commercial means during the previous year. This includes restoring a façade, historical buildings or repurposing blighted spaces. The tenants of 1649 Main Street received this award because their respective building upfits continued the revitalization of Main Street northward, expanding one of Columbia’s primary business and arts and entertainment districts while preserving an important vestige of the city’s architectural and economic history.

Celebrating its 18th anniversary this year, Garvin Design Group (GDG) offers comprehensive planning and design services for a variety of project types and sizes. From master planning and programming to interior up-fits and new construction, GDG strives to provide client-driven design solutions throughout South Carolina. The firm of 20 people has completed more than $900,000,000 worth of projects since its founding in 2003. GDG’s contributions to the community and the profession earned it the American Institute of Architects – South Carolina’s (AIA SC) 2019 Firm Award and the Columbia Chamber’s 2020 Small Business of the Year Award. The 2021 South Carolina Historic Preservation Award is GDG’s 26thaward for adaptive reuse/historic preservation. For more information, visit www.garvindesigngroup.com.

Hood Construction Company was founded in 1986 as a full-service Construction Management firm, currently licensed in South Carolina, North Carolina and Georgia. Now in its 35th year, Hood specializes in CM-R and Design-Assist Delivery, Pre-construction Consulting, Site Analysis, Project Management and General Contracting for a broad spectrum of commercial and industrial clients. For more information, please visit us online at www.hoodconstruction.com.