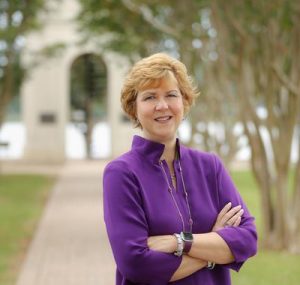 The Community Foundation of Greenville has awarded Furman University President Elizabeth Davis the Education Transformation Award in recognition of her deep commitment to improving higher education and student experiences.

“Elizabeth is able to actively listen and engage in conversations of how to align Furman with our city,” said Community Foundation President Bob Morris in an interview with TOWN Magazine. “She is able to articulate complex matters in a persuasive way that builds momentum for collective action using evidence-based, best practices. She is clearly an authentic leader, and her ability reflects decades of senior leadership at Furman and Baylor University.”

After receiving the award, Davis told the magazine: “From an educational perspective, this is the most consequential award I’ve ever received. It’s about a life’s work, not about one particular initiative. After 30 years, looking back, I know this path was the right one for me. I’m so glad I took it.”

After working at a public accounting firm in New Orleans for three years, Davis, a CPA, returned to her alma mater, Baylor University, to teach and eventually serve as executive vice president and provost, before becoming Furman’s first female president.

Davis became Furman University’s 12th President on July 1, 2014. Under her leadership, the university instituted The Furman Advantage, a distinctive vision for higher education that combines learning with immersive experiences outside the classroom, creating a personalized pathway that prepares students for lives of purpose, successful careers and community benefit. The effort, which received more than $52.5 million in support from The Duke Endowment, was launched in October 2016.

This year, Furman extended its Pathways Program, a mentoring and advising curriculum designed to ease the transition to college and encourage belonging and reflection, to all students for their first two years.

During her tenure, Davis also empowered and supported four university institutes – The Riley Institute, The Shi Institute for Sustainable Communities, The Institute for the Advancement of Community Health, and The Hill Institute for Innovation and Entrepreneurship – in addition to leading Greenville County’s REEM (Race Equity and Economic Mobility Commission) Education Task Force.

“We have extended the boundaries of education beyond the gates, as we like to call it,” she said. “This couldn’t have happened if we weren’t all pulling in the same direction. That’s the most meaningful piece to me.”