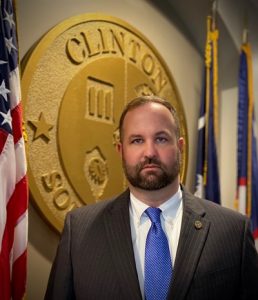 In an announcement made Tuesday night following the regularly scheduled meeting, County Council Chair Brown Patterson announced that Thomas R. Higgs, II will be the next county administrator.

Prior to accepting the county level position, Higgs served as the Assistant City Manager for the  City of Clinton and then moved into the role of Interim Manager earlier this year.

Mr. Higgs was one of 28 candidates for the job of County Administrator. Council was presented great candidates by Find Great People. The first cut of candidates was narrowed down to 12, then subsequently to 6. After that round of interviews, the pool was narrowed to 4. Mr. Higgs came out on top of the field for the Administrator job.

The other two candidates in the top 3 (in no order) were Mr. David Garner from Abbeville County and Mr. Jonathan Rorie from Peachtree City, GA. Moving forward the final contract negotiations will be made and the contract executed.

Higgs received a Bachelor of Arts from the University of South Carolina and a Master’s in Public Policy from Liberty University. He is a member the SC City and County Management Association, graduate of the SC Economic Development Institute, Certified with FEMA Community Emergency Response Team, member of the SC State Guard as an Administrative Officer, and a YMCA Volunteer Coach in addition to many other accolades.