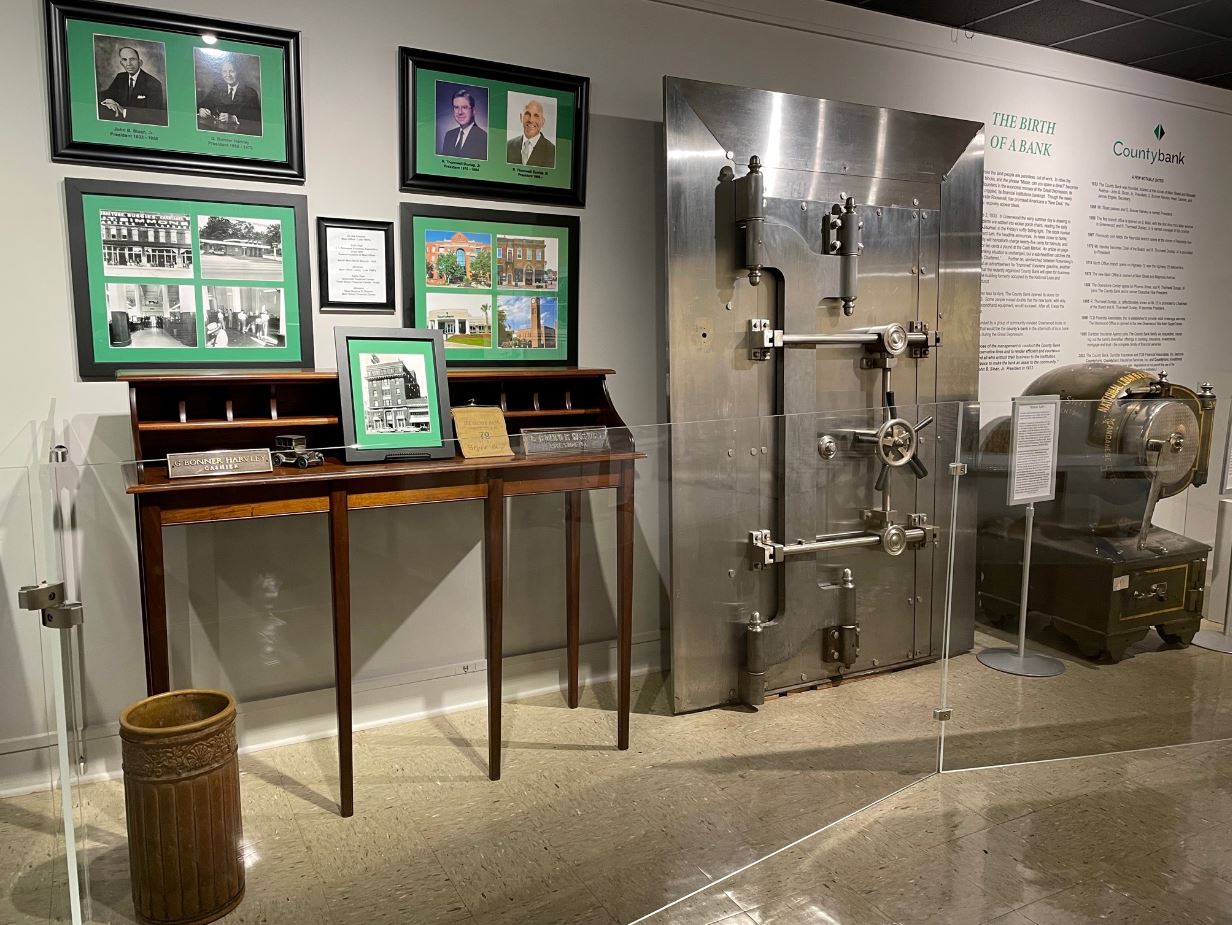 The Museum in Greenwood recently opened a new permanent exhibit featuring Countybank. The exhibit displays many historical items from the bank’s almost 90-year history, including old photographs of the bank’s branches, a Brandt Automatic Cashier, a Mosler safe, and most notably a “cannonball safe.”

The County Bank was founded in 1933 by a group of community-minded Greenwood businessmen to ensure there was a bank that would be the county’s bank in the aftermath of local bank closures and restructuring during the Great Depression. Today, Countybank provides mortgages, insurance, trust, and investment products, in addition to personal and business banking services.

“Countybank has played a major role in the development of Greenwood and neighboring communities, with additional offices in Greenville, Simpsonville, Greer, and Anderson,” says Marion Smith, Coordinator of Exhibits for The Museum. “As one of Greenwood’s iconic businesses dating back to 1933, it is fitting that Countybank be represented in The Museum’s permanent exhibits that highlight the history of Greenwood.”

The new Countybank exhibit sits alongside exhibits featuring other noteworthy businesses, like the Index-Journal, and Greenwood Mills, that were founded in Greenwood and have a long history serving its residents. Many of these businesses remain in business today and continue to have a positive impact on the community.

“Countybank has a rich history that is rooted in the Greenwood community,” says R. Thornwell Dunlap III, President and CEO of Countybank. “We are honored to partner with The Museum on this exhibit and to be recognized alongside our neighboring historical Greenwood businesses.”

The Greenwood Museum was established in 1967 and opened to the public in 1970. The Museum has a variety of interactive exhibits for all ages, including a 1900 year replica of Main Street Greenwood, animal exhibit, and Carolina kitchen. The Museum houses roughly 50,000 artifacts and features rotating and traveling exhibits. The Railroad Historical Center, located on South Main but also part of The Museum, features a 1906 Baldwin steam engine train and caboose.