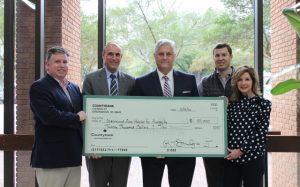 The Countybank Foundation, established in 1971 representing Countybank and Greenwood Capital, recently donated $20,000 to Greenwood Area Habitat for Humanity. This donation is part of a five-year plan to donate a total of $100,000.

The team joined Greenwood Area Habitat at the site of a home build that Countybank and Greenwood Capital are sponsoring. “It’s exciting to see our contribution literally take shape as the framework of this home is completed,” said Turner, who previously served on the Board of Directors for Greenwood Area Habitat. “These homes make such a difference in the lives of those in need in our community.”

The annual Countybank Foundation donation, initiated four years ago, previously supported the Greenwood Area Habitat’s Uptown Greenwood ReStore. Now that the ReStore is firmly established, funds go directly to local home builds. “Countybank and Greenwood Capital supported us when we needed it most during a time of transition,” said Baggett. “Through their support we are not only able to build more homes but also bring a longer-term vision to life.”

Most recently Greenwood Area Habitat has begun development of a planned subdivision. “The Countybank Foundation is honored to provide continued support that brings visions like this to life and in turn have a positive impact on our local community,” said David Tompkins, Senior Vice President, Greenwood Market Executive of Countybank. “We look forward to seeing this new subdivision grow and prosper.”

Habitat for Humanity is a nonprofit organization that helps families build their own homes alongside volunteers and then pay an affordable mortgage. Its goal is to create opportunities for all people to live in decent and durable shelter.