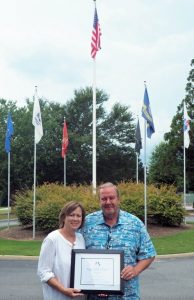 The Mount Ariel Chapter of the National Society of the Daughters of the American Revolution presented Jim and Denise Medford, owners of The Links at Stoney Point, with a certificate to honor their patriotism.

Photo: Jim and Denise Medford, of Greenwood, received a certificate of award from the Mount Ariel Chapter of the National Society Daughters of the American Revolution for their business’ presentation of the U.S. flag.

The presentation was made Monday, June 14, in honor of Flag Day, the observance recognizing the date on June 14, 1777, when the nation’s first American flag was introduced by the Continental Congress.

“The flag display at The Links at Stoney Point, created by Jim and Denise Medford, has great visual impact for all who visit there and also is a grand representation locally of our military history,” said Helen Nazzaro, regent of the Mount Ariel Chapter.

The American flag at Stoney Point is surrounded by flags representing every arm of the U.S. military, including the Army, Navy, Air Force, Marines, and U.S. Coast Guard. The POW/MIA flag was donated by a former prisoner of war who was imprisoned at the Hanoi Hilton during the Vietnam War with the late U.S. Sen. John McCain. The armed services flags and flag poles were donated by veterans who live in Stoney Point.

“It was the desire of the Continental Congress that the new flag be represented by 13 stripes of red and white to recognize the 13 colonies and have 13 white stars highlighted on a blue field. Although the flag has changed over the years as new states were added, the American flag is an enduring legacy of our nation’s fight for freedom,” Nazzaro said.