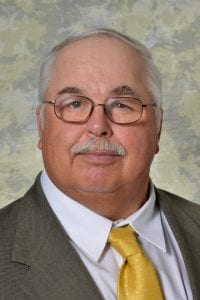 David E. “Gene” Branham Sr., has been reappointed to serve a second term on the South Carolina Department of Transportation (SCDOT) Commission.

Branham, of Kershaw County and representing the 5th Congressional District, first joined the SCDOT Commission in 2016.

“I am very pleased to have been reappointed for a new term on the SCDOT Commission,” Branham said. “The next four years are an important time for our state’s transportation system as we continue to rebuild from 30 years of underfunding. I plan to work diligently as Commissioner to provide the best possible transportation system for my District and the state of South Carolina.”

Prior to joining the Commission, Branham had more than 20 years of service as both a past chairman and a commissioner with the Kershaw County Transportation Committee. He served his country in the National Guard for 6 years and also served on the Applied Technology Education Campus Advisory Board. Branham has been a citizen of Kershaw County for more than 47 years. He is married to Gail H. Branham, and they have three adult children: David, Patricia and Adam.