You know the lyrics … “Deck the halls with boughs of holly …” Sadly, songs like “Deck the Halls” fall victim to commercialism. This time of year businesses and ad agencies cram the airwaves with cheesy jingles. Yes, this time of year ads hijack Christmas songs to sell everything under the sun. It takes zero creativity to fit ad copy to music. Zero. But, genuine Christmas music lives on.

Let’s deck the concert halls with great musicians so we can still hear heartfelt Christmas music, and not just in churches. Sunday, December 1, I attended a concert in Charlotte, North Carolina, with my daughter, Beth, and her family. It was a long but special evening. We made the five-hour roundtrip from Apex, North Carolina, to Charlotte to the Dale F. Halton Theater to enjoy the Charlotte Civic Orchestra’s Eight Annual “Christmas Extravaganza,” a delight for the ears, eyes, and spirit. 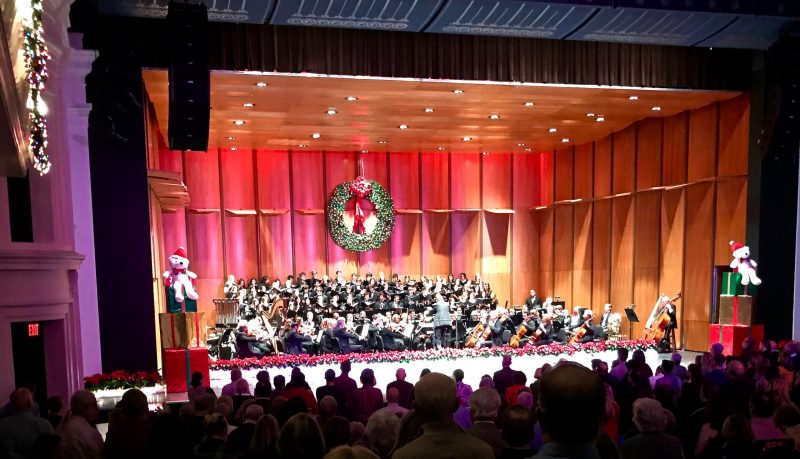 Beth’s oldest son, Ben, plays viola in the Charlotte Civic Orchestra, so it was especially special. Fifty-five musicians, a conductor, an emcee, fourteen ballerinas, thirty dancers, ten holiday singers, a soprano, a baritone, and my grandson entertained a packed house for well over two hours.

For me the evening ushered in the Christmas spirit and I caught myself recalling many a Christmas as a child as the orchestra and dancers staged a spectacle. Fabulous costuming, wonderful music, Christmas decorations, and a well-organized and -performed concert made for a memorable evening.

No political correctness on this night. We enjoyed a Christmas Extravaganza, not a Holiday Extravaganza. The word “Christmas” rang out loud and clear. “Christ Is Born,” in fact, provided the grand finale. Leading up to it were Christmas classics such as Tchaikovsky’s “Dance of the Sugarplum Fairy” and somewhere among all the strings, brass, and percussions I heard “Jingle Bells,” a song that both Savannah, Georgia, and Medford, Massachusetts, claim as their own. (The towns feuded over the song written by James L. Pierpont. Upset mayors even wrote tart missives to one another.) “Sleigh Ride,” “Wassail,” “Fantasia on Greensleeves,” Handel’s “Hallelujah Chorus” and other songs provided an evening with something for everyone, including “The Santa Express,” as musical tastes go.

I kept my eyes on Ben as he contributed to the harmonies pouring forth from the stage. I felt like I was in New York City—it was that grand. For me the concert was more than special. It was seeing just what a good upbringing accomplishes. I’ve followed Ben’s path to adulthood for over twenty-two years now. I have a photo of him as a toddler wearing his Lion King costume and I have photos of him receiving his college diploma. A graduate of North Carolina State University, he works as a data scientist for Lowe’s. His mom and dad made all the right decisions, sacrificed, and “raised him right” as we say down South.

They raised all three children right, and it shows, beautiful music of another kind, music that gives well beyond Christmas year round, year after year.