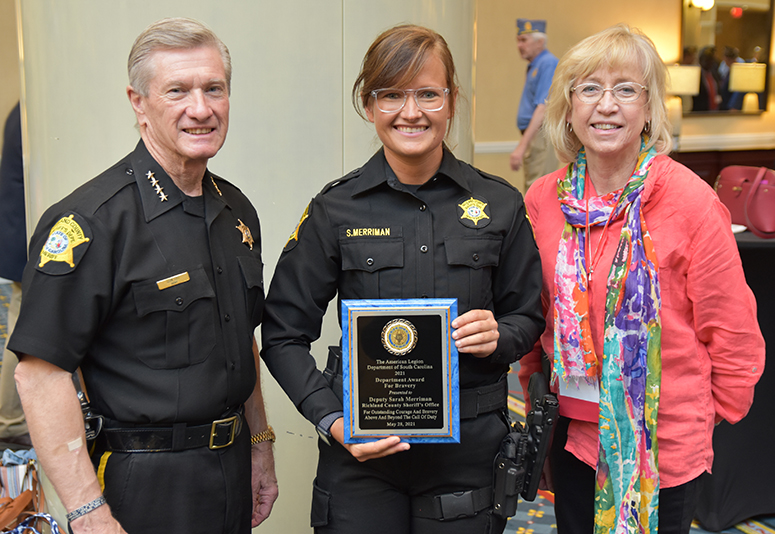 Richland County Sheriff’s Dept. (RCSD) Deputy Sarah Merriman was presented the American Legion (S.C. Dept.) Award for Bravery during ceremonies at the Marriott Columbia, Fri., May 28. The award reads: “For outstanding courage and bravery above and beyond the call of duty.”

Merriman was similarly and for the same act of bravery honored earlier this year with the RCSD Medal of Valor. According to her Medal of Valor citation from Jan. 13, 2021, on Nov. 19, 2020, while responding to a “domestic dispute with [a person armed with] a weapon,” Merriman encountered the male suspect brandishing a shotgun and “in a very agitated state.” The suspect was shouting at the deputy and calling for her to shoot him.

Realizing that drawing her own weapon would only heighten the suspect’s rage, Merriman had the “presence of mind” to raise her own empty hands as she approached the threat, demonstrating a “cool composure,” so reads the citation, which enabled her to talk the suspect into surrendering the shotgun and himself.

“I thought this could take a really bad turn,” Merriman told WIS-TV last December. “I was thinking that the worst-case scenario that you never want to happen could possibly happen.”

Richland County Sheriff Leon Lott had nothing but praise for Merriman’s actions.

Reviewing the body camera footage, he explained, “Deputy Merriman was simultaneously dealing with a crime and a person in crisis. She would have been justified in pulling her own weapon, but that was precisely what the suspect wanted her to do, and she recognized that.”

Lott added, “Her thinking was clear and her judgment sound as she made a calculated risk that saved lives.”

In addition to the May 2021 American Legion award and the January RCSD award, Merriman was named DEPUTY OF THE YEAR 2020 during RCSD’s annual awards ceremonies also in January.