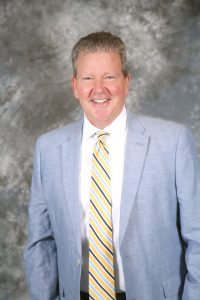 An award-winning educator with 30 years of experience, Carnahan has served as principal of Lexington Elementary School since joining Lexington District One in 2020.

He began his career in 1992, teaching third and fourth grades at McDonald Elementary School in Georgetown County School District. In 1997, the district promoted him to assistant principal at the same school.

He transferred to Sampit Elementary School in 1999 and helped open that new school. Later, he helped them achieve National Blue Ribbon award recognition.

In 2002, the district promoted Carnahan to principal of GCSD’s Pleasant Hill Elementary School. During his three years there, the school received recognition for closing the student achievement gap.

Carnahan joined the district office as special programs coordinator in 2005, where he worked to implement an International Baccalaureate Program in pre-K through grade 12. He also supervised gifted and talented academic and artistic programs.

He returned to the work he loved best, becoming principal at Waccamaw Intermediate School in GCSD when it opened in 2008. While there, the school earned a 2019 Palmetto’s Finest Award, consecutive Palmetto Gold Awards for overall achievement, recognition for closing the student achievement gap and National Blue Ribbon School status.