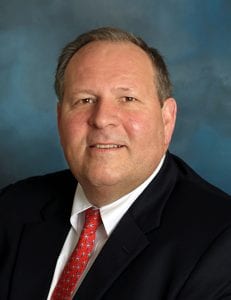 The University of South Carolina Board of Trustees unanimously elected Dr. Charlie Dorn Smith, III to a two-year term as the body’s new chairperson during a board meeting on Friday, Aug. 14.

Smith, a surgeon and native of Turbeville, S.C., represents the Third Judicial Circuit and has served as a member of the Board of Trustees since 2010. His board experience includes service on numerous committees including Audit and Compliance, Student and System Affairs, Academic Affairs and Faculty Liaison, and Health Affairs.

“I’m truly honored to be elected board chair of this great institution, and I look forward to working with my fellow board members and President Caslen in ensuring we are providing a world-class education to our students,” Smith said.

Smith is a graduate of Wofford College and earned his medical degree from the University of South Carolina’s School of Medicine in 1985. He is board certified in general and cardiovascular surgery and is a practicing surgeon in Kingstree and Florence, S.C. He serves as director of Cardiovascular Services and Vascular Lab, and Chief of Surgery at Williamsburg Hospital. He also is chairman and CEO of The Citizens Bank in Olanta, S.C. and is a member and current secretary of the Board of Trustees of the Bell W. Baruch Foundation in Georgetown, S.C.

Smith and his wife, Deborah, reside in Turbeville and have three adult children.