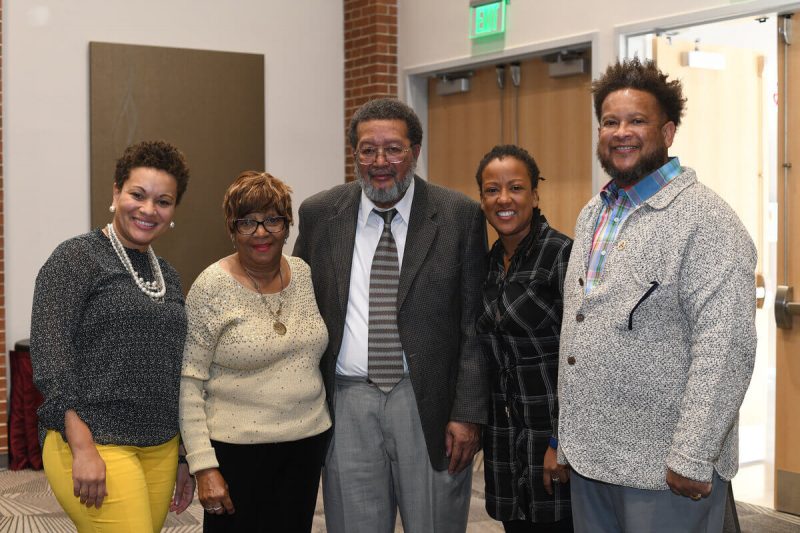 After more than four decades as a faculty member at Sherman College of Chiropractic, Associate Professor John H. Porter Jr., D.C., has announced his retirement effective December 31. A 1977 Sherman College graduate, Porter joined the college in 1979 as a faculty member and has dedicated his years at the college to teaching the next generations of doctors of chiropractic as well as serving the local community through his private chiropractic practice as Spartanburg’s second Black chiropractor.

Porter announced his retirement during the college’s annual employee service awards program on November 19 among colleagues and friends. Having joined the college faculty just six years after its founding, Porter has taught nearly every Sherman College student to walk its halls, leaving a lasting impression on many alumni. During that same awards program, Porter’s daughter, Princess Porter-Fowler, D.C., was named Faculty Member of the Year; she is an assistant professor of clinical sciences and a 2001 Sherman College graduate.

“No doubt after 40-plus years of service, Dr. Porter could teach us all a thing or two about community, and about building a legacy,” shared Sherman College President Edwin Cordero, D.C. “Dr. Porter has influenced thousands of lives in this community, and in the chiropractic profession, for the better. We are so thankful for his commitment to Sherman College, to chiropractic education, and to Spartanburg.”

Vice President for Academic Affairs Joe Donofrio, D.C., ’94, A.C.P., said Porter is a “bedrock” of Sherman College. “Every one of our graduates, for 41 years, has a memory of Dr. Porter teaching them the Palmer Toggle Recoil technique,” he said. “What has made him such a powerful instructor is that he is a man of few words, but he has the fastest toggle that I’ve ever seen. He is certainly a Sherman College legend, and his daily presence on campus will be missed.”

In 2019, in celebration of his 40th year on the faculty, Sherman College established a scholarship fund in Porter’s name with the goal of lessening the financial burden faced by generations of future chiropractic students. Two Dr. John H. Porter Jr. Scholarships have since been awarded, with one recent graduate already pursuing a career of service like Porter, and another still in attendance at Sherman College.

Sherman College of Chiropractic provides students with a comprehensive chiropractic education, preparing them to enter the field as doctors of chiropractic who are highly skilled, compassionate, ethical and successful. On its 80-acre campus in South Carolina, Sherman offers a first professional degree program unique in its approach to health care and known globally for the skill and art of chiropractic delivered by graduates. For more information, visit www.sherman.edu or call 800-849-8771.