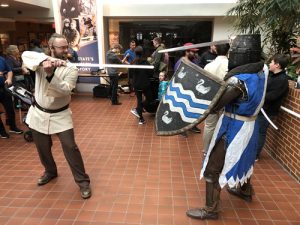 We’ve been hunkered down for the past year, but the time has come to draw swords and come forth: SwordFest 2021 will happen on Saturday, April 24, at the South Carolina Confederate Relic Room and Military Museum.

Actually, call it “Mini-Swordfest,” as it will be somewhat smaller than past events, and the lectures and demonstrations will only last 25 minutes each. Also, know that we are by no means throwing caution to the wind: We still have a city ordinance, and everyone will still need to wear masks.

This is the fourth year for this popular full day of sword-related programs, lectures and demonstrations for all ages.

And it’s free! But registration in advance – at SwordFestSC.com – is encouraged to help us with our planning.

Demonstrations will include kids’ interactive sessions during the day, a Japanese sword-drawing demonstration, and the Palmetto Knights Steel Combat Team doing a full-contact fighting demo. And more.

Aside from the lectures and demonstrations, there will be tables in the Atrium for representatives of local recreational swordplay groups to display various items of interest to devotees of bladed combat.

Here’s the schedule for the demonstrations and lectures:

Throughout it all, the following groups will have display tables up in the Atrium: