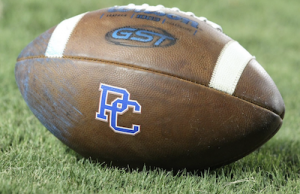 Presbyterian College head football coach Steve Englehart has announced the addition of a pair of coaches to his staff.

Jayson Martin joins the Blue Hose staff as the assistant head coach along with recruiting coordinator and will work with the tight ends while Daniel Owen will serve as Presbyterian’s defensive coordinator.

“Jayson has been my right hand man for over a decade and I am excited he will be joining me here at Presbyterian as the Assistant Head Coach and Recruiting Coordinator.  Not only has Jayson been a very successful offensive coordinator but has always been a relentless recruiter. I can trust him with many different aspects of our program.  Our TE unit will be extremely well coached and be a huge part of our offense in 2022.” commented Head Coach Steve Englehart

“I am thrilled to bring Dan Owen in as our defensive coordinator.  I believe that he is a creative, bright young coach that our player will really connect with.  It is important to Dan to build relationships with his players and help them navigate life not just football.  Dan will build a hard nosed, physical defense that plays extremely hard.” added Englehart.

In his lone season at Gannon, he had a pair of All-PSAC First-Team all-conference honorees in running back Melvin Blanks and guard Montana Nietert. Blanks was a two-time offensive athlete of the week as selected by the PSAC. Gannon totaled its most wins since 2017 this past season.

During his time at Florida Tech, the Panthers led the Gulf South Conference and ranking 23rd in the nation with 37.4 ppg in 2016. Florida Tech reached the NCAA DII Playoffs twice during his tenure with the Panthers. Martin had a pair of offensive players land spots on the Gulf South’s All-Decade team in wide receiver Xavier Milton and tight end Kenny Johnston. He coached 30 All-Gulf South selections and five all-Americans.

At Rose-Hulman, he led the offense that was top three in scoring offense in the Heartland Collegiate Athletic Conference all three season. In 2009, the school led the league in scoring offense (36.5), and total offense (428.2) all while guiding conference’s offensive MVP Derek Eitel. During that same season the offense broke Rose-Hulman program records for points scored (365), total offense (4,282), passing yards (2,849) and touchdowns (73).

In his playing career, he was a four-year member of DII Kentucky State’s program as the quarterback from 1996-2000 as he helped lead the Thorobreds to a Pioneer Bowl in 1997. Martin graduated from Kentucky State with a Bachelor’s in Education in 2001.

Owen comes to the Blue Hose family after spending the past season working with the safeties in the 2021 season at N.C. Central. He spent the spring of 2021 as a special teams analyst at Florida Atlantic. In 2020, he was a defensive graduate assistant at East Carolina.

He spent the two seasons prior to that as the Keiser university’s defensive coordinator while also working as the special team’s coordinator for one of those two seasons in Fort Lauderdale. He got his start in the coaching ranks from 2013-17 at Florida Tech working with the cornerback and wide receivers during his time with the Panthers.

Owen spent the 2021 season working with the safeties and also worked with the punt/punt return group at N.C. Central. The Eagles had their first winning season in four years in 2021 as Owen mentored All-MEAC safety Manny Abad and All-American punt returner Brandon Codrington. The Eagles led the MEAC and were fourth in the country in Yards/Punt Return with 16.6. NCCU also led the MEAC in net punting with an average of 1.5 yards/return. Owen was a part of a defense that ranked second in scoring defense with 22 ppg.

He worked the spring of 2021 as a special teams analyst with the Florida Atlantic Owls. Owen worked with the Owls special teams coordinator in practice planning, install and game planning, while also assisting the outside linebackers in the same duties.

In 2020, Owen spent time as a defensive graduate assistant at East Carolina working mainly with the safeties. He was responsible for the SAM and Nickel positions during individual drills and helped prepare different materials for the coaching staffs in practice and on gamedays.

He spent a pair of years working as the defensive coordinator at Keiser university. In the school’s inaugural season the team went 6-4 with a defense consisting of 8-9 freshman each week. The defense ranked 22nd nationally allowing just 22 ppg and was also 22nd in total defense per game (338.2 yards/game). The Seahawks ranked 13th in the country in takeaways while checking in eighth in pass defense efficiency (100.8) and 17th in pass defense (167.3 yds/game). The defense had two all Mid-South selections along with one all-american and the freshman defensive player of the year.

In 2019, he also added special teams coordinator to his work at Keiser as the school went 9-0 with a division championship in the school’s second football season. He had three all-conference choices with a defensive player of the year on a defense that was third in total pass defense. On the special teams side of the ball, Owen had the number two punt returner in the country averaging 17.1 yards per attempt.

Owen spent time at Florida Tech as the cornerbacks coach, wideouts coach and special teams coordinator over five years with the Panthers. In 2015 & 2016 Manny Abad was selected 1st Team all Gulf South. Florida Tech reached the 1st round of Playoffs in just its 4th year with an 8-3 record. During the 2016 season, the defense ranked 22nd in scoring defense with 20.0 points per game. In 2017 his special teams unit blocked five kicks and averaged 11.1 yards per return.

In his playing career, he spent time at Los Angeles Valley College and Florida Tech. He received the Jason Leonard Coaches Award that is given to a player that exemplfied most what it meant to be an LA Valley Monarch by his commitment, leadership and attitude. He also received the AAA award for best demonstrating commitment to his academics, ability and attitude.