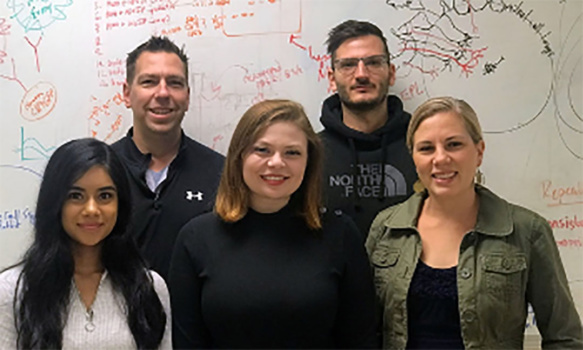 Clemson College of Science associate professor and researcher David Feliciano has received a $667,000 grant from the Department of Defense to explore the cellular underpinnings of Tuberous Sclerosis Complex (TSC), a developmental disorder characterized by the growth of benign tumors throughout the body, most notably in the brain.

Young children with TSC often have seizures, learning disabilities, behavioral issues, and a high rate of autism. A hallmark of the disorder is the presence of growths in the brain called subependymal giant cell astrocytomas (SEGAs). SEGAs can block cerebrospinal fluid flow resulting in hydrocephalus, behavioral changes, nausea, headaches, seizures, and are a cause of mortality. SEGAs can be surgically removed, however, their presence in infancy usually precludes immediate removal. Early intervention improves prognosis.

“About a third of the TSC cases are inherited from a parent, while about two thirds of cases arise during in utero development,” said Feliciano, of biological sciences. “There are clues leading to a TSC diagnosis. For example, an infant may have seizures characterized by a head bobbing motion that almost looks like he or she is nodding off, skin lesions, and red bumps comprised of blood vessels on the face, especially on the nose and cheeks.”

According to Feliciano, scientists know that TSC occurs because of a mutation on either the TSC1 or TSC2 gene. These genes normally produce proteins that stop cell growth via the mammalian target of rapamycin (mTOR) pathway. However, TSC1 or TSC2 mutations result in excessive mTOR activity and cell growth.

In the course of the three-year project, Feliciano will generate a novel mouse model of TSC, characterize the molecular pathways in this model, and test two potential drug therapies to evaluate their effectiveness on treating these harmful SEGAs.

The model will have mutations engineered in the neural stem cells of newborn mice. When these stem cells divide, the cellular progeny will be deficient in the Tsc2 gene, mimicking the human disease. These mice will also express an inducible fluorescent protein allowing the altered cells to be tracked by microscopy.

“We’ll be able to closely examine how the SEGAs form in this model,” Feliciano said. “We can examine the cell types and cellular processes that are altered, and we can study how the biochemical pathways are altered within the SEGA cells.

“While we have developed other models of TSC, none to date fully recapitulate SEGAs,” Feliciano added. “Having a SEGA model is important because it allows one to interrogate the molecular pathways and identify mechanisms of pathogenesis.” In the final step of the project, Feliciano will test the effectiveness of two potential therapies which may stop the formation of SEGAs.

TSC is a relatively rare disorder, occurring in one out of every 6,000 births. TSC provides a framework to understand the pathways that orchestrate normal brain development. Many other diseases are also characterized by changes to the same pathways, although the causative genes are unknown. Therefore, the results of this research will be applicable to additional diseases, said Feliciano, citing cancer and epilepsy as two examples.

This research is supported by the Department of Defense Award Number W81XWH-19-TSCRP-IDA. The content is solely the responsibility of the authors and does not necessarily represent the official views of the DoD.