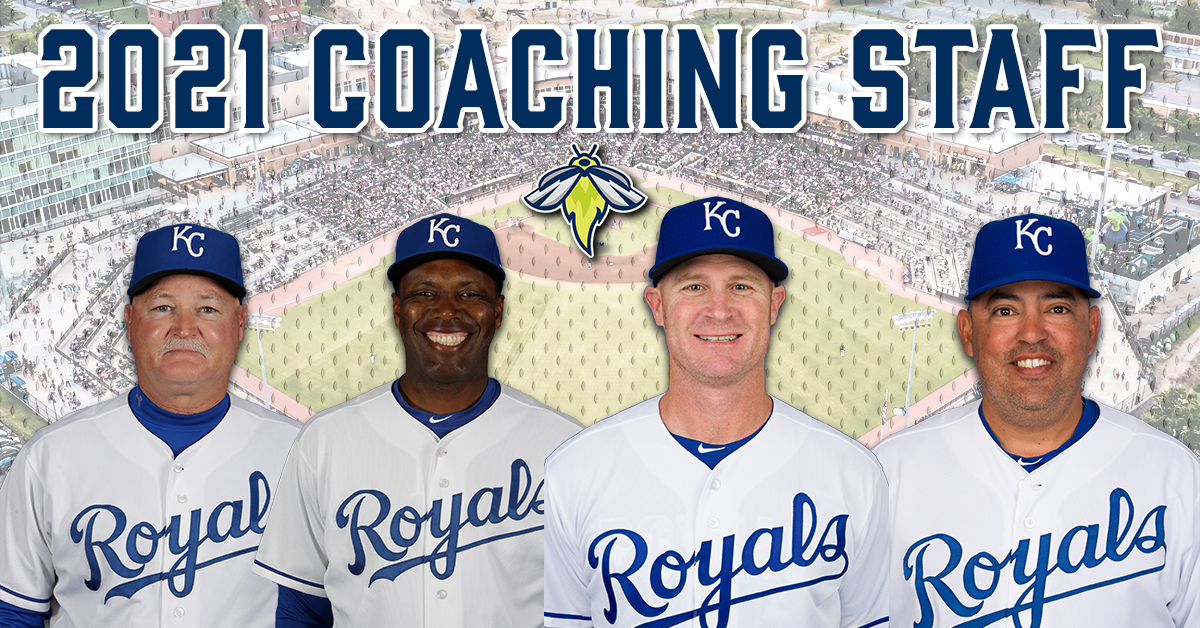 The Columbia Fireflies, in conjunction with the Kansas City Royals, announced their 2021 field staff. The first Royals staff to come to South Carolina’s capital is headlined by Brooks Conrad, who led the Lexington Legends to the 2019 South Atlantic League Championship.

The Fireflies 2021 manager had a lengthy playing career after being drafted in the eighth round of the 2001 draft by the Houston Astros. He spent seven seasons in Minor League Baseball prior to playing parts of six seasons in the majors with Oakland, Atlanta, Milwaukee, Tampa Bay and San Diego. After retiring as a player, the Southern California-native began coaching in Burlington (NC) in 2017 as the first base coach. The following year, the Arizona State University graduate became Burlington’s manager before heading to Lexington to man the helm in 2019. The 2021 season will mark his fourth as a member of the Royals Minor League staff.

Conrad will be joined by hitting coach Jesus Azuaje and bench coach Glenn Hubbard, both of whom were on Conrad’s 2019 Lexington Legends staff.

“The Royals have sent us phenomenal coaching staff for the 2021 season,” said Fireflies Team President John Katz. “We have great relationships with Brooks, Jesus and Glenn – some dating back several years – and we couldn’t be more pleased with the quality, character and ability they will bring to the clubhouse and to the field at Segra Park.”

Azuaje has been a hitting coach for the Royals since 2015, working the last four years at the Low-A level. Prior to that he worked as a Latin American Field Coordinator for Seattle in 2012 and Los Angeles (Dodgers) in 2014. Azuaje spent six years with the Mariners. He managed the Arizona Mariners in 2010 and 2011, and served as the hitting coach for the Clinton LumberKings. Azuaje enjoyed a thirteen-year playing career that was highlighted by an Appalachian League All-Star season in 1993 and a Southern League All-Star season in 1999.

The veteran of the group is Hubbard, who has been in organized baseball since 1975 when he was drafted in the 20th round by the Atlanta Braves. Born on Hahn Air Force Base in Germany, Hubbard moved to California and then Utah as a high schooler before spending 12 years in the big leagues with Atlanta and Oakland. Some of his career highlights include winning a World Series in 1989, becoming a 1983 NL All-Star and tying a Major League record with 12 assists in a single game at second base April 14, 1985. After his playing career, the Georgia-resident spent 21-years coaching with the Atlanta Braves, including 12 seasons as Bobby Cox’s first base coach from 1999-2010. In 2011, he joined the Kansas City Royals as an Infield Coordinator before a seven-year stint as the bench coach of the Lexington Legends.

Carlos Martinez has been named the pitching coach in his 25th year in the Royals organization. In his last eight years with Kansas City, he has worked as the pitching coach of the Burlington Royals. After being signed by the Royals in 1997, his playing career stretched until 2000 where he transitioned to coaching at Salcedo in the Dominican Republic in 2001. He moved state-side after the 2006 season, where he spent two years coaching in Arizona before coaching in Idaho Falls in 2009 prior to his run in Burlington.

The 2020 staff is rounded out by strength and conditioning coach Taylor Portman and athletic trainer Brad Groleau.

For more information about the Columbia Fireflies and the 2021 season, visit columbiafireflies.com.