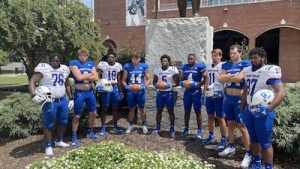 As the countdown towards the opening act of the 2022 season ticks underneath one month, the Presbyterian College football team gears up for practice #1 on Friday morning. Serving as the first organized preseason gathering of head coach Steve Englehart‘s debut campaign for PC, the Blue Hose will conduct their Friday practice session at 9:00 a.m. at the practice fields located on campus.

Tomorrow morning’s exercises will conclude at approximately 11:30 a.m. to kick off Presbyterian’s August practice schedule. The above time placements are subject to change due to local weather.

In charge of starting and guiding the Florida Tech football program from 2011-20 before accepting head coaching duties at PC, Englehart carries an abundance of excitement surrounding the program awaiting next month’s 2022 kickoff by virtue of his 70 victories, two-time Gulf South Conference Coach of the Year awards, and two trips to the NCAA Division II playoffs during his stay in Melbourne, Fla.

Presbyterian awaits their 16th season as a Football Championship Subdivision (FCS) program this fall off the back of a 2021 slate that saw the blue and white collect nearly 5,700 yards of total offense beside 37 points per contest. Redshirt junior running back Delvecchio Powell II looks to build off a productive individual campaign a year ago that saw the Georgia native compile 775 yards on the ground alongside six touchdowns, adding an additional 447 receiving yards and another TD throughout the semester.

On the defensive side of the ball, sophomore linebacker Alex Herriott returns after totaling a team-best 61 tackles (eight of which were for a loss) and three sacks during PC’s ’21 venture.

Once all preseason activities come to a close, Presbyterian will pull back the curtain on a brand-new season with a September 3rdroad trip to Austin Peay on a 7:00 p.m. start time. The following weekend, the Blue Hose will celebrate the 20th anniversary of Bailey Memorial Stadium by welcoming Virginia University of Lynchburg on September 10th at 1:00 p.m.

After three non-conference contests to open their 2022 layout, PC will set their sights on the first of eight PFL matchups in a row on September 24th, hosting Davidson in the Battle for the 1919 cup.