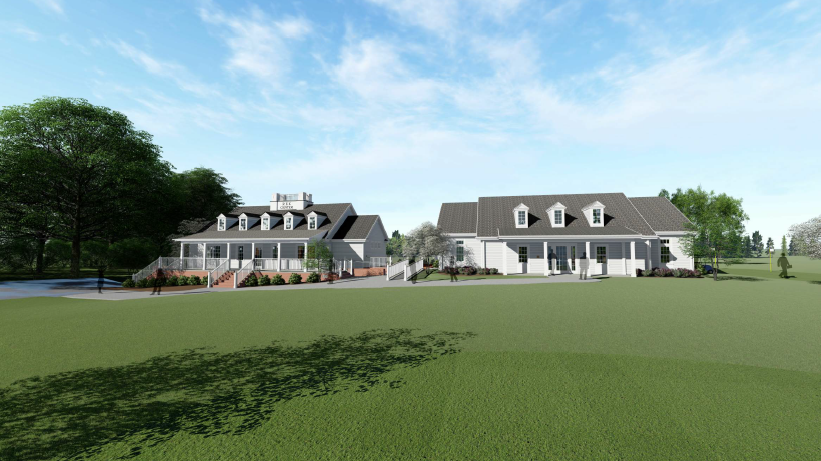 Furman is set to begin construction this fall on the new Davis Faxon Training Facility at REK.  This 100% donor-funded facility, which will be utilized by both the Paladin men’s and women’s golf programs, is named in honor of former Paladin golf greats Cindy Davis and Brad Faxon, who provided lead gifts in the capital campaign.

A three-time All-American selection, Davis was the individual runner-up at the 1983 NCAA Championship where she helped the Paladins to a ninth-place finish, and she went on to finish 12th and lead Furman to a third-place showing at the event as a senior the following season.  The 1984 Edna Hartness Furman Female Athlete of the Year, she captured individual medalist honors at the 1983 U.S./Japan Cup and was inducted into the Furman Athletics Hall of Fame in 2011.  Davis, the former president of Nike Golf, has served as both vice president of the LPGA and senior vice president of the Golf Channel.

A 1991 inductee into the Furman Athletics Hall of Fame, Faxon won the 1983 Haskins Award, which is given annually to the nation’s most outstanding male collegiate golfer.  A two-time All-American, he competed on the 1983 Walker Cup Team and received both the 1983 Golf Magazine and NCAA Coaches’ Awards as the country’s top amateur golfer.  Faxon, who turned professional in 1983, captured eight tournament victories on the PGA Tour.  He led the PGA Tour in putting average in 1996, 1999, and 2000, when he set the single-season record with only 1.704 putts per green in regulation.

“We are so grateful for the generosity of Cindy, Brad, and many others who stepped up to ensure that Furman has one of the best facilities in the country,” said Furman women’s golf head coach Jeff Hull.  “Our outdoor training space is regarded as one of the best in the country.  The renovation of the existing REK building, as well as the new Davis Faxon Training Facility, will celebrate our great past while creating an environment for continued development well into the future.”

Over $800,000 in donor commitments have been secured to fund a two-phase expansion and upgrade to the REK Complex.  Phase one, the addition of the new state-of-the art facility, will begin this fall and has an anticipated completion date of early spring 2021.  The Davis Faxon Training Facility at REK will boast six hitting stations in three covered bays, an indoor putting studio, a club repair shop, plus a workout area.  Graphics and branding that celebrate the Furman golf legacy will be prominent in the space, which is being designed in collaboration with women’s golf alumna Christina Harrell of Jack Porter.

Besides providing an indoor training alternative for the Paladin teams during inclement weather, the Davis Faxon Training Facility at REK will help Furman continue to attract the nation’s top talent and both develop and retain elite golfers.  Not only will the facility offer new amenities beyond those in the current facility, it will celebrate the legacy and longstanding tradition of Furman golf by honoring Paladin legends such as Dottie Pepper, Beth Daniel, and Betsy King, along with Faxon and Davis.

Phase two of the project includes a renovation of the REK Center, with construction to begin as commitments are funded.  Office suites and locker rooms for both programs will be renovated, and the building will feature a new Frank Keener Team Meeting Room, generously gifted by Judy Keener of Nashville, Tenn., which will include study space and a kitchen area for student-athletes to utilize.  Graphics and branding from Jack Porter will be prominent in the locker room, team meeting room, lobby, and coaches offices.  The reconfigured REK will better facilitate coaching, recruiting, and team building.

“This will be a facility that the students will be able to utilize year round to help reach their potential,” said Paladin men’s head coach Matt Davidson.  “Our outdoor practice area at the REK Center is already one of the best in the Southeast, and to be able to have an indoor facility and renovated REK team clubhouse to match will benefit both player development and recruiting.  We couldn’t be more excited.  Thank you so much to Cindy and Brad and so many others who generously made this possible.”

Furman plans to hold a dedication ceremony for the new facility in the spring of 2021.