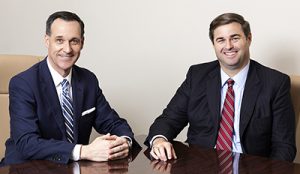 The Best Lawyers in America publication is highly regarded and is used as a referral guide in the legal profession. It represents attorneys in 80 specialties in all 50 states and Washington, D.C. Top lawyers in the nation are evaluated and selected by fellow attorneys for the award. The peer-reviewed publication is considered among the most reliable sources for legal referrals.

Mr. Smith is a co-founder of the firm, practicing in the Firm’s Sumter office. He earned his Bachelor of Arts from Wofford College in 1990. After earning his Juris Doctor from the University of South Carolina School of Law in 1993, Mr. Smith began practicing law in his hometown of Sumter. In 2000, Mr. Smith was elected to the South Carolina House of Representatives, serving District 67. He began his political career as a member of the House Judiciary Committee rising to first vice chairman. In 2009, he moved to the House Ways and Means Committee and was Chairman of the Health and Human Services Subcommittee beginning in 2012. On December 5, 2018, Mr. Smith was elected as the Chairman of the South Carolina House Ways and Means Committee. Mr. Smith also serves on the South Carolina Judicial Merit Selection Commission.