Using data gathered by the Large Area Telescope onboard NASA’s Fermi Gamma-ray Space Telescope and a stacking technique combining signals too weak to be observed on their own, researchers detected gamma rays from UFOs in several nearby galaxies for the first time, providing a basis for scientists to understand what happened in our own Milky Way galaxy.

UFOs are ultra-fast outflows — powerful winds launched from very near supermassive black holes that scientists believe play an important role in regulating the growth of the black hole itself and its host galaxy.

Clemson University scientists’ collaborative research is published in The Astrophysical Journal. Partners include the College of Charleston, the University of Chicago, and a host of other researchers who are part of the Fermi-LAT Collaboration, which includes hundreds of scientists from 12 countries. “Gamma rays from Fast Black-Hole Winds” outlines the detection of gamma-ray emission from UFOs launched by supermassive black holes.

Black holes can launch extremely powerful winds, so they’re not eating everything. They are like powerful vacuum cleaners that eject some of the dirt that gets near it instead of sucking in everything. These ejections, which are tsunami-like winds, are made of highly ionized gas. When they interact with the interstellar medium, they create powerful shock waves. – Marco Ajello, an associate professor in Clemson College of Science’s Department of Physics and Astronomy who is co-leading the study. 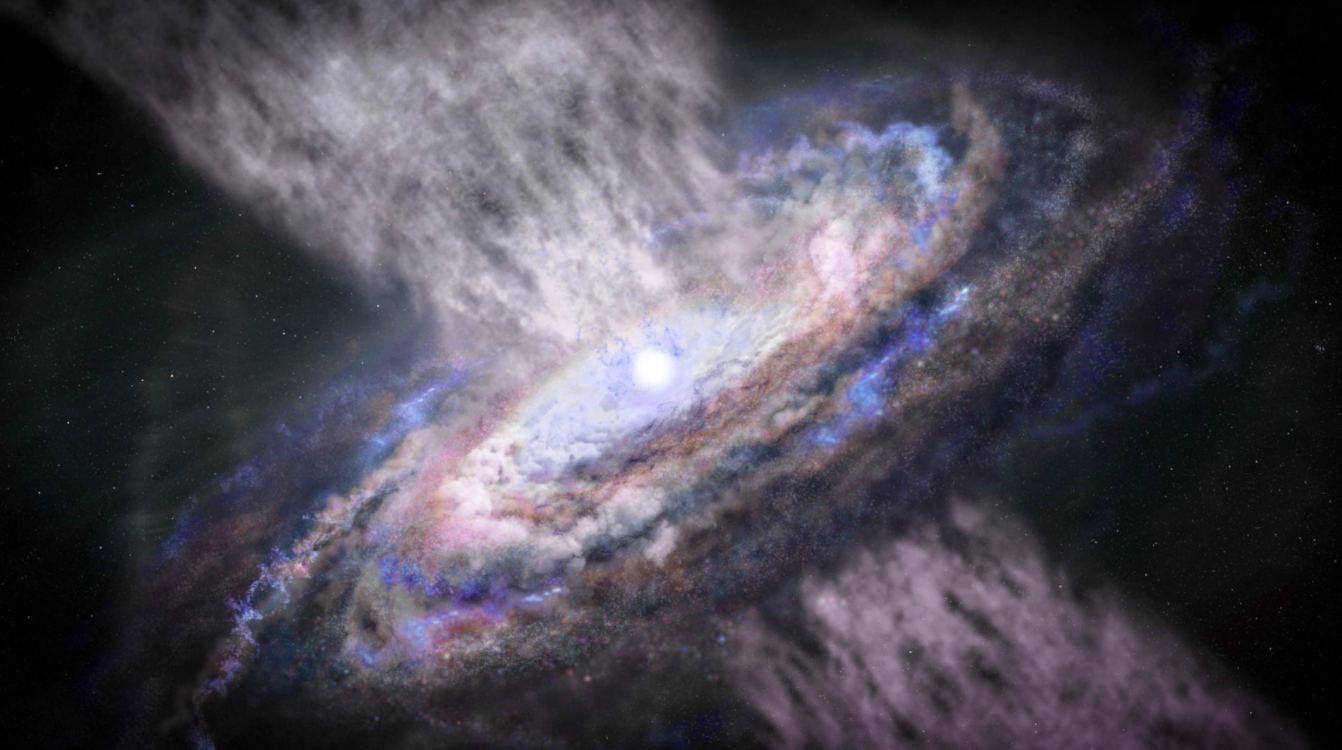 “Although these winds are challenging to detect, it is thought that they play a significant role in how a massive black hole and the host galaxy itself grow,” said Chris Karwin, a postdoctoral fellow in the College of Science’s Department of Physics and Astronomy and leader of the study. “Our gamma-ray observations show how supermassive black holes can transfer a large amount of energy to their host galaxy. These UFOs create shock waves, which act like pistons and actually accelerate charged particles, known as cosmic rays, to near the speed of light.”

Every galaxy has a supermassive black hole at its center. Some are dormant. Others, called active galactic nuclei, are active, meaning that they draw in and “eat” the surrounding matter through a process called accretion.

While traveling through the galaxies, the winds gradually disable star formation. “The effect on the galaxy is dramatic,” Ajello said. “The black hole at the center of the galaxy and the galaxy itself have a mechanism to grow together in mass — and this is the mechanism.”

Because the gamma rays detected are produced by cosmic rays accelerated at the shock front, Karwin said it attests to the onset of the wind-host interaction and that the UFOs can energize charged particles up to the transition region between galactic and extragalactic cosmic rays.

The findings of the study could help scientists understand what happened in our own Milky Way galaxy.

Sagittarius A* is the supermassive black hole at the center of the Milky Way with about 4 million times the sun’s mass. Extending above and below the Milky Way’s disc are Fermi bubbles, enormous round structures of hot gas emanating from the galactic center. They’re called Fermi bubbles because the Fermi Gamma-Ray Space Telescope, the source of the data used by Ajello and Karwin in the current study, discovered them in 2010.

“Today, our black hole, Sagittarius A*, is not active, but it’s possible it was active in the recent past, maybe up until a few hundred years ago,” Karwin said. “Our model supports the hypothesis that these Fermi bubbles may be remnants of past UFO-like activity from the supermassive black hole in the center of our galaxy.”

Ajello said future work includes studying galaxies that have had active UFO winds for 10s of millions of years that have already traveled to the outskirts of the galaxy.

This research was supported by the National Science Foundation and NASA through grants AST-1715256 and 80NSSC18K1718. The content is solely the authors’ responsibility and does not necessarily represent the views of the funders.

The College of Science pursues excellence in scientific discovery, learning and engagement that is both locally relevant and globally impactful. The life, physical and mathematical sciences converge to tackle some of tomorrow’s scientific challenges, and our faculty are preparing the next generation of leading scientists. The College of Science offers high-impact transformational experiences such as research, internships and study abroad to help prepare our graduates for top industries, graduate programs and health professions.

FROM THE EXPERT: MARCO AJELLO, Ph.D.

There is a lot to be discovered about the Universe and its extreme environments, where nature harnesses energies far beyond anything possible on Earth. Ajello’s research focuses on the evolution of super-massive black holes and galaxies, the generation of truly diffuse backgrounds (from infrared to gamma rays), high-energy transients and high-energy sources in general. Research on cosmology, particle physics, high-energy astrophysics and gravitational physics has progressed in the last decade and his work seeks to further unveil the mystery behind some of nature’s most powerful phenomena.