Garvin Design Group received a Citation Award for Adaptive Reuse of 1649 Main Street at the American Institute of Architects Columbia’s (AIA Columbia) 2020 Design Awards on Thursday, November 5th. The building is now home to Hendrix and The Woody. 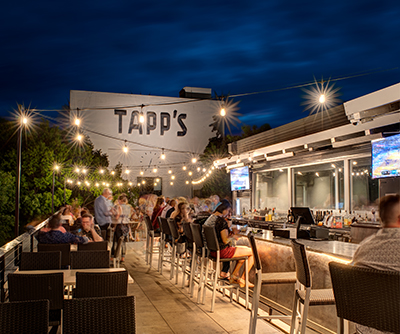 Originally constructed in the mid-19th century, 1649 Main Street is one of the oldest surviving buildings in Columbia’s Main Street Commercial Historic District. It was occupied by grocery and meat market E.T. Hendrix from 1906 to 1926, and by Ruff Hardware from 1928 to 1998. After nearly a decade as the home of beloved Columbia restaurant Hennessey’s, 1649 Main Street sat vacant and fell into disrepair. Phased rehabilitation restored the building’s historic storefront on Main Street, opened up the wide sidewalk to create a garden level courtyard along the side of the building, removed worn out finishes to expose historic wood floors and brick walls, and removed a late 20th century mezzanine and drop ceilings to expose historic trusses and pressed tin ceilings. The rooftop bar and garden level patio have helped the building’s tenants stand out in an increasingly crowded field of new dining options in Columbia. As the COVID pandemic continues to challenge the hospitality industry, these outdoor spaces have enabled new tenants Hendrix and The Woody to adapt their business models and provide safe service. Adaptive reuse of 1649 Main Street has continued the revitalization of Main Street northward, expanding one of Columbia’s primary business and arts and entertainment districts while preserving an important vestige of the city’s architectural and economic history.

AIA Columbia’s Citation Award for Adaptive Reuse recognizes thoughtful interventions or restorations that create a synergy between old and new construction. Members of the awards selection committee particularly noted how well design for the building’s reuse incorporated multiple layers to maximize the narrow footprint, resulting in clever articulation of the narrow floorplate integrated vertically. They also noted how well the building’s reuse celebrated its context.

“We are so grateful to be part of this building’s story,” said Scott Garvin, Garvin Design Group President. “Adaptive reuse projects are always a challenge but seeing 1649 repurposed is so worthwhile. We love how this transformation uses so much of the building’s historic fabric for a totally new and vibrant use. We’re so pleased that our peers and colleagues at AIA Columbia love its reuse as well.”

Celebrating its 17th anniversary this year, Garvin Design Group offers comprehensive planning and design services for a variety of project types and sizes. From master planning and programming to interior upfits and new construction, the firm strives to provide client-driven design solutions throughout South Carolina. The firm of 18 people has completed more than $900,000,000 worth of projects since its founding in 2003.