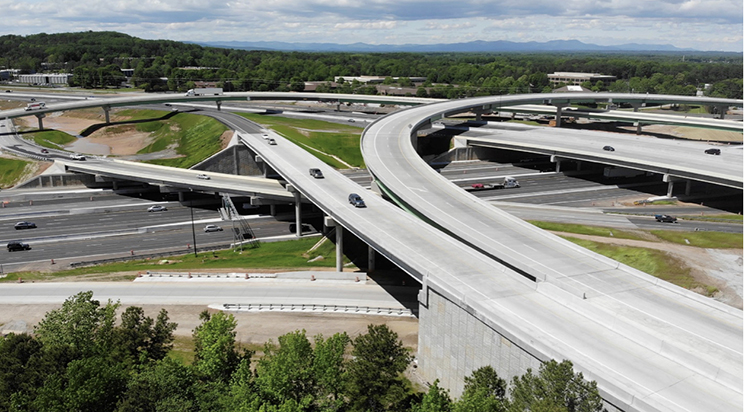 The value Greenville area residents and businesses have gained from the new I-85/I-385 Interchange since it opened to traffic has just been affirmed with an award of excellence the project received from the Southeastern Association of State Highway and Transportation Officials (SASHTO).

The new interchange, known as the “Gateway” project, has received SASHTO’s top award for “Operations Excellence” among large road and highway projects across 13 Southeastern states and Puerto Rico. The project’s design, engineering and construction was recognized for excellence in delivering a “more reliable, well-functioning, and safer transportation system.”

“SCDOT’s top priority is to deliver the best transportation system possible to South Carolina’s citizens and businesses,” said Secretary of Transportation Christy Hall. “The Gateway project meets that objective, and we’re very excited that the hard work and professionalism of our employees, contractors and partners are recognized by one of the top transportation organizations in the nation.”

The $300 million project opened to traffic on December 6, 2019 and includes 10 new bridges, the rehabilitation of three others, several new ramps, additional travel lanes, and reconfiguration of two interstates. Gateway incorporates operational improvements, such as eliminating the tight loop ramps and replacing them with flyovers to provide free-flowing movement through the interchange.

The project is part of SCDOT’s 10-Year Plan to improve the safety of our rural roads, resurface our most traveled and aging corridors, repair or replace deteriorating bridges, and widen and improve key portions of our interstates. The plan was launched in July, 2017 with enactment of the state’s gas tax increase.

The new 85/385 interchange is one of three high-priority interchanges SCDOT has identified across the state for strategic investment. The other two are the Carolina Crossroads project in Columbia and the I-26/I-526 interchange in Charleston.