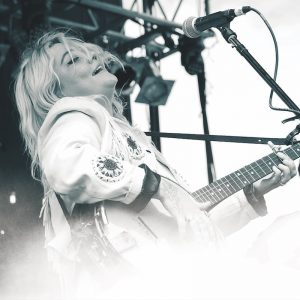 Now in its seventh year, Famously Hot New Year is South Carolina’s free party of the year — bringing tens of thousands of guests to the Midlands region — complete with an international headliner, the biggest NYE fireworks in the Carolinas, regional food vendors, beer, wine and bubbly in a festive, friendly environment in the midst of Columbia, S.C.’s vibrant, walkable downtown districts.

Singer-songwriter, guitarist, bassist and banjoist Elle King’s sound is a unique assemblage of rock, blues, soul and country. The U.K. Guardian lauds her “dirt, depth and attitude,” adding that she “mixes major-label hit material with a natural-born authenticity and earthiness.” King’s performance at South Carolina’s largest free NYE event will be followed by the biggest fireworks display in the Carolinas at midnight. You can plan your #FHNY weekend at http://www.famouslyhotnewyear.com/.

The event is set in the heart of Columbia, S.C.’s historic district, with plenty of parking, hotels, restaurants and shops for those crafting a long weekend to celebrate New Year’s Eve. The concert stage is set at Gervais St. and Sumter St., which makes for a prime viewing location of the midnight fireworks show above the historic S.C. State House. FHNY is again partnering with COMET buses, and guests can also get home safely with $10 off Budweiser Alert Cabs.

Elle King
Singer-songwriter, guitarist, bassist and banjoist Elle King is a musical force to be reckoned with. King encapsulates a variety of genres — from blues, soul and country to rock and pop — adding a personal flair to all styles of music she performs. Her debut album “Love Stuff,” released in 2015, includes hit songs “Ex’s and Oh’s” and “America’s Sweetheart.” Her hit single “Ex’s & Oh’s” was nominated for two GRAMMYs, two Billboard Music Awards and was certified double-platinum; she made chart history when she became the second female artist in 18 years to reach #1 at Alternative Radio, following Lorde’s #1 with “Royals” in 2013. King’s single “Ex’s & Oh’s” also claimed the #1 spot on the AAA and Hot AC charts and the #1 spot on the Billboard “Hot Rock Songs,” making her just the fourth female lead act/artist to top this chart in its six-year history.

King wowed the crowds at Stagecoach and New Orleans Jazz & Heritage Festival this year and will be live in Atlanta with Willie Nelson and the Hollywood Bowl in November. She is currently working on her upcoming sophomore album and will be hitting the road with more tour dates in 2018.

King released her first EP “The Elle King EP” in 2012, and gained praise from media outlets like Vanity Fair and Esquire, had songs featured on TV campaigns and was featured in VH1’s “Mob Wives Chicago” theme song. After the release of her EP, King was featured on “David Letterman,” and opportunities started flying her way. She later released her 12-song album “Love Stuff” in 2015 under producers who have worked with Kanye West, Adele and U2.

“Through laughing, jumping for joy, kicking, screaming, I feel like I finally found my sound,” said King. “I feel unbelievably lucky. I still can’t believe I’m getting away with it.”

Throughout her career, King has toured extensively with popular artists like Ed Sheeran, Train and Of Monsters and Men. In 2016 her song “Good Girls” was featured on the “Ghostbusters” original motion picture soundtrack along with artists like Fall Out Boy and acapella group Pentatonix. King has also been featured on a song with country music singer Dierks Bentley. Their song “Different for Girls” won a CMA award in 2016 for Musical Event of the Year and reached #1 on the Mediabase and Billboard Country airplay charts. You can learn more about Elle King at http://www.elleking.com/.

Nappy Roots
Two-time GRAMMY nominated hip-hop group Nappy Roots is an American alternative Southern rap quartet that is best known for their hit singles “Po’ Folks,” “Awnaw,” “Roun’ The Globe” and “Good Day.” The group is made up of artists Skinny DeVille, Fish Scales, B. Stille and Ron Clutch. Nappy Roots has been an active part of the music scene since 1998 and prides itself on constantly producing music that is real and relatable, while maintaining an ambitious touring schedule. This four-man collective is a passionate storyteller with an undeniable Southern swagger. After 10 years as independent artists and label owners, Nappy Roots will be releasing their sixth studio album, and their fourth independent release on their very own label, Nappy Roots Entertainment Group (NREG). They have most recently and notably been featured on 2014’s Neighbors film track starring Seth Rogen and Zach Efron and on 2016’s The Secret Life of Pets, along with many others. Learn more: http://nappyroots.com

Past performers have included Trombone Shorty and Orleans Avenue with Sister Hazel (2016); Ms. Lauryn Hill (2015); The O’Jays and Misterwives (2014); Kool and the Gang and Z.Z. Ward (2013); The Wallflowers, Atlantic Starr and Biz Markie (2012) and George Clinton (2011). What started in 2011 as a NYE street concert and fireworks show has grown into a major statewide celebration, set amid the capital city’s historic downtown dining and shopping districts, with multiple hotels within blocks of the festivities. Plan your #FHNY weekend at www.famouslyhotnewyear.com.