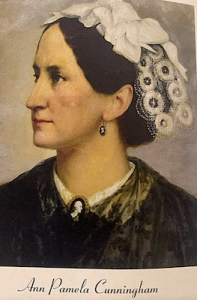 Historic preservation and the opportunity for increased historic tourism will be the highlights of a groundbreaking ceremony planned for the Rosemont historic site on Monday, November 14 at 11 a.m The Rosemont site is located at 1375 Shrine Club Road, Waterloo. The site is near Lake Greenwood.

The Rosemont Preservation Society and the Laurens County Trails Association will host the event, which will mark the beginning of a major improvement project at the Rosemont site. A contract has been awarded for the construction of a parking lot and a trail to the site of historic Rosemont, the ancestral home of Ann Pamela Cunningham   She has been recognized as the first historic preservationist in the United States  for her work during the mid 1800’s to restore and preserve Mount Vernon, the home of George Washington. The Cunningham family was also prominent during the American Revolution in the South Carolina Back country..

The Rosemont Preservation Society and the Laurens County Trails Association are working cooperatively on the Rosemont project. Laurens County Council provided funding for the project through the American Relief Plan Act (ARPC) program.

In an historical irony, Ann Pamela Cunningham was the primary  leader in the effort to restore and maintain Mount Vernon during the 1850’s. She worked to preserve the home of the commander of the American Continental Army, even though her ancestors had supported the British during the American Revolution. Ann Pamela was made aware  of the terrible condition of Mount Vernon and she launched a campaign to preserve and maintain the historic house located in Virginian. She founded the Mount Vernon Ladies Association in 1853 and served for many years as the Association’s first regent. She gained participation from all 30 states at that time and the Association raised sufficient funds to purchase Mount Vernon from the Washington family in 1859.

“The Rosemont Preservation Society is grateful to the South Carolina Conservation Bank and to Laurens County Council for their support in this project,” said Doris Taylor, president of the Society. “We are very pleased that we can work with the Laurens County Trails Association on this project.. We also appreciate the support of two vice regents of the Mount Vernon Ladies for their support of the Rosemont project,”

Rosemont is one of several historic sites to be developed as part of a major effort to celebrate Laurens County’s rich and colorful history in the American Revolution.