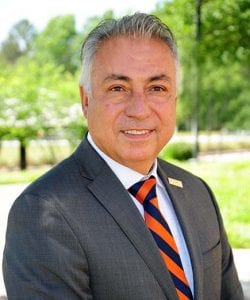 Hamid R. Mohsseni of Anderson has been appointed to Tri-County Technical College’s Commission, the nine-member governing board of the College.

He serves on the Board of Regents for Anderson University and the local Salvation Army board.  He has served on the boards of Region’s Bank, the Anderson Chamber of Commerce, the Anderson YMCA, United Way of Anderson County and the AnMed Hospital Foundation.  He is an ex-officio member of the Tri-County Technical College Foundation.

A native of Tehran, Iran, Mohsseni came to the United States in 1977, earning a bachelor’s degree in civil engineering from Clemson University.  He previously was general partner of Kelsey’s Restaurant in Hendersonville, N.C.

He has made Anderson his home for 25 years with his wife, KD, and their 14-year-old son, Maddox.