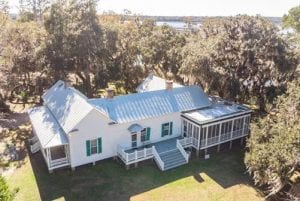 Officially Sold to A Conservation-Minded Family

A historic 1830’s South Carolina home known as “The Darlington House” is preserved for the second time in its storied history. Once located 110 miles from its current location, The Huffines Company announced that a buyer has stepped up to ensure the 150+ year old home is getting its much deserved second lease on life.

The start of this historic house began in the 1830’s as a two-room structure built of rough sawn heart pine. Originally located in the town of Allendale, SC on three acres of land, it remained true to its original footprint until the 1870’s when Pierce Allen gifted the parcel, and the house, to his daughter Lucy Allen and her husband Colonel William Roundtree Darlington. Upon receipt, W.R. Darlington added a series of six rooms configured in a U shape with an inner gallery.

All was well until the years passed and the house, which once stood in pristine condition, was slated for demolition. Enter an heir of the Darlington family, acclaimed New Orleans jewelry designer Mignon Faget and her husband Dr. Philip Jeffrey Bower. Enamored with its historic nature, they relocated the home to its now present location on Huspah Creek in Seabrook, SC.  On a high bluff containing 12 acres with waterfront views shaded by ancient live oak trees, the front entrance porch and interior gallery were restored much to their original appearance and the piers and chimneys were reconstructed with the original rare yellow Allendale brick, among other nods to its heritage.

With the recent decision to put the acreage on the market, worries were raised that the deep water historic parcel could easily be lost to the pressure of development and multiple lots. Fortunately, the new owners have the property’s best interest at heart. The land and the home will be preserved, just as it should be.

“This estate was always noted, not just for its historic significance, but for its preservation. We are so pleased to have had, even a small hand, in this property’s conservation via the recent sale. The Darlington House will once again remain in caring hands,” stated Calvert Huffines, President and Managing Partner of The Huffines Company.

About The Huffines Company