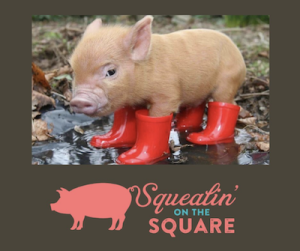 Main Street Laurens and officials from the City of Laurens have announced that the city’s annual fall barbeque festival, “Squealin’ on the Square,” has been rescheduled to take place next week due to Hurricane Ian. Now in its twenty-first year, the festival is scheduled to begin on Friday, October 7th, and continue through Saturday, October 8th.

“We don’t make changes like this without serious consideration,” said Main Street Laurens Director Jonathan Irick. “But, the weather forecasted for this weekend will be miserably wet at best and dangerous at worst. After consulting with the City and considering all the factors, we felt that rescheduling the festival for next weekend was the best possible option.”

“The safety of our citizens and guests is always our top priority,” said Laurens Mayor Nathan Senn. “Main Street Laurens and the City of Laurens work hard to put this festival on each year, and we know this is something our entire community comes out to enjoy. It also has a significant economic benefit for our community. Hopefully, everyone will plan to come out and enjoy this event next week and won’t mind avoiding a downpour this week.”

Kansas City Barbeque Society (KCBS) which sponsors an annual competition for barbeque teams that is held inconjunction with Squealin’ on the Square, announced Wednesday morning that the competition had been canceled for this year and would not be rescheduled.

“While it is a disappointment that we will not have the competition barbeque teams visiting our city, most of these teams would have been cooking just for the competition, and the general public wouldn’t have gotten to taste their barbeque,” said Irick. “So, even though we won’t have this barbeque competition happening behind the scenes, the experience for the average festival-goer will not be significantly affected when we are able to get together next
week.”

Looking ahead, current weather forecasts indicate that Laurens should experience ideal, sunny fall weather with temperatures in the low to mid-70s. Additionally, both Clemson and the University of South Carolina football teams, which draw significant crowds when they are playing at home, are scheduled to play away games on Saturday, October 8th.

“We try to be consistent with the timing of Squealin’ on the Square so that people can look forward to it and plan for it, but with outdoor festivals – especially during hurricane season – you never know what you’re going to get,” said Irick. “This year, delaying the festival by one week may make it even better than we planned and certainly more enjoyable than trying to endure the rain from a tropical storm!”