Clothes make the man, and when it comes to camouflage, it must make the man, woman, boy, and girl too. Seems everyone wears camouflage year-round, but it’s a rural, small town thing. You don’t see city people wearing camouflage unless you go to places like Sportsman’s Warehouse and Walmart where you’re apt to see most anything. 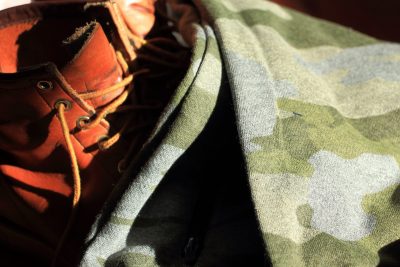 As the military goes, wearing camouflage can make the difference between living and dying. As hunting goes, it can make a hunt successful, but wearing it all the time? What kind of fashion statement is that? When I return to my hometown, most mornings I go to the Huddle House for coffee and pancakes. That’s when I notice that just about every patron is wearing camouflage. They look like they just left the deer stand. They look as if they just broke camp from some deep woods outpost. They come in like they just scored a rack with the Boone and Crocket system. When they step outside and the wooded ridge beyond the Lincolnton Presbyterian Church cemetery rises behind them, presto, they’re invisible.

I joke with my sisters about all the camouflage I see. Well, the joke’s on me. Sister Benda gave me camouflage sweat pants for Christmas. I’ll wear them when jogging. I don’t hunt, not anymore, but plenty folks do and they wear camouflage, be it mimicry camo like tree bark or breakup camo that hides the body’s outline. There’s even 3-D camo with fake leaves and grass. Sounds like something a sniper would wear.

Wearing camo while pursuing wild game goes back a long ways. Prehistoric men wore animal skins while hunting wild oxen. We know this thanks to cave paintings. Flash forward to today. The Wall Street Journal says camouflage prints have become a staple among men, that they’re here to stay. I believe it. Wearing camouflage says, “I’m a sportsman. I like the outdoor lifestyle.” Experts say camo establishes a bond among those who wear it. That is, if they can see each other, and when hunting let’s pray that they do.

You may have seen that a father, 30, and his daughter, nine, were killed in Colleton County, South Carolina New Year’s day while deer hunting. Reports said it was unclear if they were wearing blaze orange safety clothing. I don’t know if they were wearing camouflage. Mistaken for deer, they were shot with buckshot during a deer drive. The accident happened on private property where protective clothing is recommended but not mandated, according to the South Carolina Department of Natural Resources. Laws mandate the wearing of blaze orange on public lands. Seems to me wearing camouflage beneath a blaze orange vest cancels out camo’s effectiveness. It’s a curious pairing, and it’s a curious thing to see folks wearing it in restaurants, but see it I do back home. All the time.

Maybe I’ll buy a matching top and cap and wear camo the next time I go to Huddle House. Maybe the locals will bond with me, speak even. Or I could make my own camo featuring coffee cups, pancakes, eggs, bacon strips, and napkins with matching upholstery and become invisible, an urban hunter on a quest for blueberry pancakes and coffee.