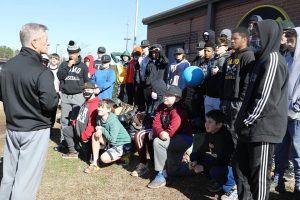 “This equipment will be delivered to neighborhoods like North Pointe Estates, Bethel Bishop, Colony Park, and others – and the teams we sponsor in those communities – for kids who want to play ball, but often don’t have the opportunity to play because they simply don’t have the necessary equipment,” says Lott. “Irmo baseball stepped up big, as did my friend and local talk radio host Keven Cohen who initiated and swung the introductions for this great giving project.”

Cohen is the host of THE POINT radio program on 100.7 FM and 1470 AM. Both Lott and Cohen called for and collected sports equipment for distribution to neighborhoods back in Nov. 2020. “But not on this past Saturday’s scale,” says Lott.

Irmo’s Coach White says this was and is an opportunity not only for the recipients, but for his team. “This teaches our athletes that it’s about giving back, giving to others, and helping to improve others,” he says. “When you look to improve the lives of other people, it improves you. This has been a growth opportunity for our young men.”

The equipment collection and delivery to Lott and RCSD coincided with Irmo Baseball’s “clean up” day, says White. “Players and families had gathered Saturday to clean locker-rooms, bathrooms, canteens, field, batting cages, the entire baseball facility, and so this – the giving – was the fun part of all of it.”

White adds, “I think next time we should encourage families to purchase new basketballs, because basketballs which are played on pavement – unlike other balls played on grass – tend to wear out quicker.”

The equipment donated, Sat. was collected by both Irmo High School and by the athlete’s families. Lott says the call for sports equipment and the collection and distribution to RCSD-supported teams will be an ongoing RCSD project.