The conventional wisdom holds — with good reason — that the economy may well settle the 2020 election. If it remains strong, President Trump stands a good chance of winning re-election. If it weakens, Trump might well be the underdog.

Take a look at the table below, which is drawn from the latest Washington Post/ABC News poll. It asked respondents whether they approve or disapprove of Trump’s handling of major issues. Of five issues, Trump leads decisively in only one, the economy. 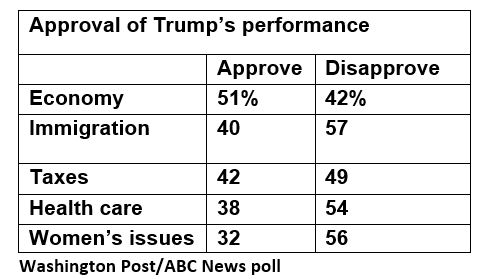 So where will the economy be by November 2020? Good question, without a good answer.

In a short but informative essay, Barry Eichengreen, a well-known economic historian at the University of California, Berkeley, lays out a surprisingly strong case for the economy to continue growing, even though it is already in the longest recovery in U.S. history at 121 months.

The biggest factor encouraging a prolonged boom, in Eichengreen’s view, may be the president himself. The Federal Reserve has kept short-term interest rates low. Indeed, Fed Chairman Jerome “Jay” Powell has hinted the Fed might soon cut interest rates. To be fair, the Fed also faces pressure to raise interest rates to demonstrate its “independence” from the White House.

Other factors favor expansion. Eichengreen cites “relatively stable oil prices,” which tend to buttress non-oil consumer spending. Also, the banking system seems stronger than it was during the 2008-09 financial crisis.

“U.S. banks remain cautious about taking risks, so there have been no major bank failures to interrupt the expansion,” he writes. “These last developments may reflect the not-so-happy fact that the expansion occurred in the wake of a sobering financial crisis. But they have been stabilizing nonetheless.”

Compounding the good news is stubbornly low inflation. “Hourly wages are rising by 3.1%, despite an unemployment rate of 3.6% [in May], the lowest level in fully 50 years,” Eichengreen notes. Higher labor costs are offset by higher productivity. With productivity increasing at about 1.5% a year, Eichengreen says, it’s hard for prices to rise above the Fed’s target of 2% a year.

None of these possibilities seems to threaten an immediate downturn, he argues. Still, any one of them could turn negative, and “there could be a geopolitical shock that causes oil prices to spike and investment to slump. … One can’t rule out geopolitical events on the Korean Peninsula, in the South China Sea, and in Venezuela.”

Stay tuned — and expect the unexpected.