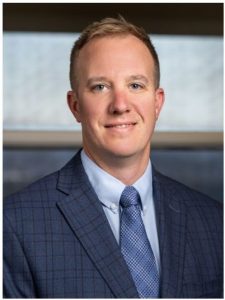 Duke Energy has named Jason Speake as the company’s Senior Economic Development Manager with a focus on recruiting and supporting companies in the Duke Energy Progress service territory.

Speake will be based in Columbia, S.C., and will work closely with local and statewide economic development professionals as well as the site selection community. Duke Energy Progress serves electric customers primarily in the Pee Dee region of South Carolina and includes Florence, Darlington and Sumter counties.

“We are laser-focused on helping prospective and existing companies in the Duke Energy service territory find the site or building with the needed electrical infrastructure to support their growth needs,” said Steve West, Duke Energy’s director for economic development in South Carolina. “We’re pleased to welcome Jason to this talented team and know he will help position the company for continued growth and success.”

He earned a bachelor’s degree in accounting from Lander University and a masters of business administration from The Citadel.

“For more than a century, our company has been dedicated to economic development and growing the economy in the communities we serve in South Carolina,” West said. “Since 2005, a dedicated team of experts recruited customers with capital investment of more than $15.8 billion to the state. Those efforts produced more than 40,780 associated jobs for the state of South Carolina.”

In 2021, Duke Energy helped recruit more than $711 million in capital investment and more than 1,030 new jobs to South Carolina.

Duke Energy is executing an aggressive clean energy strategy to create a smarter energy future for its customers and communities. The company has goals of at least a 50 percent carbon reduction from electric generation and net-zero methane emissions from its natural gas business by 2030, and net-zero emissions by 2050 from its electric and natural gas businesses, including Scopes 1, 2 and certain Scope 3 emissions. The company also is investing in major electric grid upgrades and expanded battery storage, and exploring zero-emitting power generation technologies such as hydrogen and advanced nuclear.