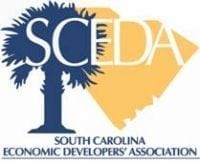 The South Carolina Economic Developers’ Association (SCEDA) awarded Jim Cook, executive director of the Cherokee County Development Board, its Local Developer of the Year award during the 2022 SCEDA Annual Conference, held May 4-6 at the Sonesta Resort in Hilton Head. Cook has been a member of SCEDA and part of the economic development community for 15 years.

Since 2005, SCEDA has presented an award to the individual who best exemplifies leadership in the state’s economic development efforts. SCEDA’s Economic Developer of the Year Award is given in recognition of the winner’s involvement in leading innovative programs, overcoming obstacles, and impactful efforts in the community.

During his tenure as executive director of the Cherokee County Development Board, Cook has played an instrumental role in closing 53 projects and fostering new and existing industries resulting in approximately $1.2 billion in new capital investment and 3,800 new jobs.

Cook, an Army Veteran, says he was shocked to receive the award and felt honored that he was considered. “I served my country and then continued to serve my county. These last fifteen years have not been a job, I consider this role a mission and a service that I am extremely proud of.”

John Lumus, President, and CEO of Upstate Alliance says Cook is highly respected in the Upstate and throughout the state.

“Jim has helped us as local economic developers in the Upstate work better. He has challenged us to look at economic development as a team sport, not an individual activity,” Lumus said.