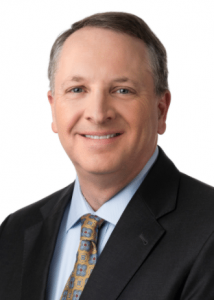 The partners of Nelson Mullins Riley & Scarborough LLP have re-elected James K. Lehman as managing partner of the Firm for his third three-year term.

“I am honored to provide continued leadership of Nelson Mullins for the next three years,” Lehman said. “The legal profession continues to be impacted by the changing business environment, so Nelson Mullins is keenly focused on adapting to the evolving needs of our clients as we have always done over our 120-year history. I am following in the footsteps of former leaders like Claude Scarborough,  Dick Riley, and David Dukes to deliver services to our clients, broaden our practice capabilities and geographic reach, and attract and develop talented professionals to the Firm.”

Nelson Mullins has grown since 2011 from the 128th to the 88th largest law firm in the nation, according to benchmark law firm rankings by the American Lawyer Media. During this period, the Firm opened new offices in Nashville, Jacksonville, New York City, Denver, and Los Angeles and expanded its practice areas and industry groups to serve clients with corporate, litigation, intellectual property, and government relations needs on a national level.

Firm performance during Lehman’s tenure also was driven by the development and growth in the new Nelson Mullins Encompass and Encap practices, comprised of a dedicated team of veteran litigators, technologists, project managers, data analysts, and litigation technology professionals who regularly serve as enterprise and global discovery and review counsel to Fortune 50 companies, particularly those in heavily regulated industry sectors.

Furthering its core value of giving back to the community and serving those normally unable to afford representation, Firm attorneys under Lehman’s tenure have increased hours of pro bono service to more than 30,000 hours in the past year – an average of almost 60 hours per lawyer – that earned the Firm a ranking of 39th nationwide for average pro bono hours, according to the Am Law National Pro Bono Rankings. In 2013, the National Legal Aid & Defender Association recognized the Firm with the Beacon of Justice Award for providing pro bono services.

In addition, the Firm is focused on several initiatives under Lehman’s leadership to promote a diverse and inclusive workplace, including a High Potentials Mentoring Program, women’s affinity groups, and award of diversity scholarships. The Firm also joined the Leadership Council on Legal Diversity, an organization of more than 200 corporate chief legal officers and law firm managing partners with a mission of creating a diverse U.S. legal profession, and became a platform partner for Lean In, a global community committed to encourage and support women in their ambitions.

Before first joining Nelson Mullins in 1995, Lehman was an associate at Davis Polk & Wardwell. From 2001 to 2004, Lehman  served as senior vice president, general counsel, and corporate secretary to Safety-Kleen Corp., where he helped the company emerge from Chapter 11 protection in what, at the time, was one of the larger and more complicated bankruptcies in U.S. corporate history. He returned to the Firm in 2004 and was elected to begin his first term as the Managing Partner of the Firm in 2012.

Lehman has served on numerous community boards and has chaired the Midlands Housing Alliance, the South Carolina Philharmonic, the Governor’s School for Science and Mathematics Foundation, and is vice chair of Claflin University, a historically black university. As chair of the United Way of the Midlands in 2010-2011, he was instrumental in securing a site for a homeless recovery center in downtown Columbia.

Established in 1897, Nelson Mullins has more than 575 attorneys and other professionals with offices in 10 states and Washington, DC. For more information on the Firm, go to www.nelsonmullins.com.