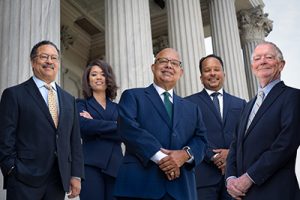 George Johnson is a graduate of the University of North Carolina at Chapel Hill and the University of South Carolina Law School. Johnson serves on the American Bar Association’s Board of Governors, the Common Pleas Docket Management Taskforce and as a Director of the General Practice Division and is a Diversity Fellow.

Best Lawyers is the oldest and most respected peer-review publication in the legal profession. A listing in Best Lawyers is widely regarded by both clients and legal professionals as a significant honor, conferred on a lawyer by his or her peers. For more than three decades, Best Lawyers lists have earned the respect of the profession, the media, and the public, as the most reliable, unbiased source of legal referrals anywhere.

For more than four decades, Best Lawyers has assisted those in need of legal services to identify the lawyers best qualified to represent them in distant jurisdictions or unfamiliar specialties. Lawyers are not required or allowed to pay a fee to be recognized; therefore, recognition by Best Lawyers is considered a singular honor.