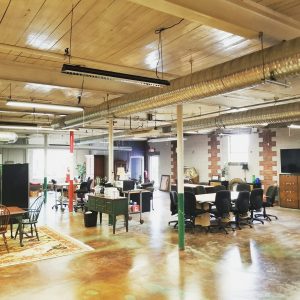 Joyner Commercial, the Commercial Division of Berkshire Hathaway HomeServices C. Dan Joyner Realtors®, announced that its commercial office at 230 Buist Avenue has been selected to receive the 2021 Commercial Revitalization Award from the Greater Greenville Association of Realtors.

The owner of record, Slate Group Assets, LLC, is owned by the families of Matt Carter and Patrick Szmurlo who are also brokers for the Commercial Division. As owners and occupants of the building, Carter and Szmurlo, wanted to create an open, warm, work atmosphere for their fellow agents. “Danny Joyner basically gave us free reign to make something good happen”, says Carter, the Broker in Charge for the Commercial Division. “We are all thankful our little industrial chic project turned out so nicely.”

The building, built in 1953 for electrical engineering company Huntington & Guerry, had been for sale for many years because sometime after it was built, zoning was put in place in the area, and it was zoned multi-family despite being a textile era office and warehouse. Previous re-zoning attempts and plans to demolish the building or to build multi-story structures had not been well received by the neighborhood. Over the years, the warehouse at the entrance to Buist Avenue from Rutherford had become an eyesore and attractive nuisance.

Fortunately, Carter was able to work with the City to allow the building to be considered grandfathered for office use.

Carter and Szmurlo updated the roof, HVAC, restrooms, parking lot, doors and windows. They replaced warehouse style metal doors with glass roll-ups which are open during nice weather. The original style and construction of the semi-historic structure was embraced and preserved. Tall, plank ceilings remain exposed.

Much of the work was completed while Joyner Commercial occupied the building making it somewhat of a team effort. Grey concrete flooring was colorfully stained to a copper tone by C. Dan Joyner agent volunteers. Between phone calls, interior columns of concrete brick were hand stained by the office manager to look like clay brick. A textile themed 1,960 sf mural was commissioned for the exterior of the building from John Daso who completed the painting over the summer. Daso’s mural pays homage to Greenville’s textile history and nearby Brutontown Community as well as to the building’s first and only other occupant of the building, Huntington & Guerry. Former employees of the electrical contractor visit regularly to see the changes.

While the updates made were primarily cosmetic, the impact is obvious.

Criteria for the Revitalization Award is based on the potential impact to a particular community through investment of time and money into a property as determined by the GGAR’s Revitalization Committee and a panel of independent judges. Over the past sixteen years, more than 380 applications have been considered.

Other commercial projects considered this year which received high marks were Trehel Corporation’s corporate office at 914 Pendleton Street and Carolina Moves at 455 Congaree Road. The Residential Revitalization 2021 award went to 106 Smythe Street with an honorable mention going to Joshua’s Way, a cooperation between Habitat for Humanity of Greenville County and Homes of Hope. Former recipients of the GGAR Revitalization award include Hampton Station, the Swamp Rabbit Inn, Westone on Stone Avenue, The Lofts at Mills Mill, and others.

About 30 agents work out of the Buist Avenue office, and BHHS C. Dan Joyner has begun upfit renovations on another office near the Haywood Mall with plans to complete by spring of 2022.