Kameelah Martin didn’t set out to be a first, but she certainly always intended to follow her ambitions and carve a path aimed at shedding light on African American studies and culture.

“It’s humbling and a bit surreal to be referred to that way,” says Martin. “I also feel a great deal of responsibility.” 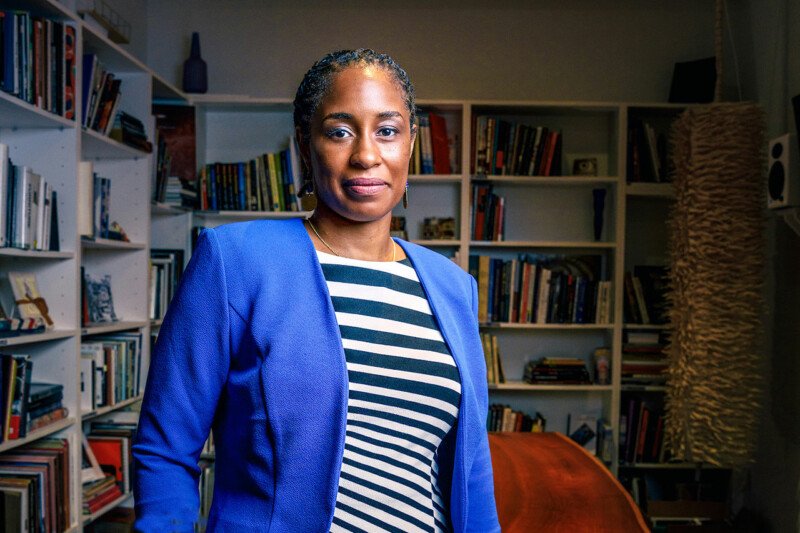 In recognition of Black History Month, Martin recently talked about what it means to be a Black woman making history in the world of academia at a time when illuminating Black history is front and center.

As a Black woman in academia, what does it mean to you to be a leader on campus and to be the first Black woman to hold your post at CofC?

It’s not a sentiment that I can express easily. I have lived a post-segregation existence; the explicit barriers to education and career advancement previous generations faced were largely removed – so, on one hand, I’ve always expected my ambition to bear fruit. On the other hand, I know that systemic oppression operates in plain sight. My story is replete with such experiences, to be sure. The percentage of Black women who hold the rank of full professor is abysmal, which doesn’t bode well for the sistas in academic leadership. I am among the few and – though I earned the position – it does come with privilege. And as the idiom taunts, “Heavy is the head that wears the crown.”

Being the first Black woman appointed as the dean of a school at the College should be celebrated, unequivocally. It is evidence that, for our institution, there is a break in the clouds. Friends and other Black colleagues have joked that I have become “a whole Black history fact.” As the first, I feel a responsibility to ensure that I am not “the only.” I feel a responsibility to empower other Black women who aspire toward higher education leadership. Leadership is a thankless task. And Black women have a laundry list of thankless tasks they have and are still performing in our society. To that end, I feel a responsibility to ensure Black women are recognized and valued for that work and to model a healthier work-life balance so that the work we do and the environs in which we do it stops killing us. Above all, I want my leadership on this campus to be impactful.

What are some of your goals for the Graduate School as you settle into your role as dean?

I am really excited about two goals within Pillar 2 of our strategic plan, which focus on academic distinction and recruiting and retaining more diverse graduate students. I would like to see the Graduate School become part of what makes this institution academically distinct. We have world-class faculty who are doing amazing research with graduate students and on their own. We have such incredible archives at the Avery Research Center for African American History and Culture and Addlestone Library’s Special Collections. Charleston is a sought-after location for research on a plethora of topics: environmental science, early American history, the Civil War, Gullah Geechee culture, marine biology – you name it. If scholars are coming to Charleston to do pre- and postdoctoral research, the College of Charleston should be at the heart of it. I am working with Provost Suzanne Austin to strategically leverage our research capacities.

These goals align with our cross-cutting strategic theme of diversity, equity and inclusion. Graduate students have expressed their concerns over the lack of diversity in the school. One of my goals is to increase the number of underrepresented minority students in the Graduate School. I am developing several diversity initiatives for this purpose — one is a dedicated diversity initiative fund to support underrepresented minority recruitment in various ways and another, long-term initiative is partnering with our state HBCUs (Historically Black Colleges and Universities) to recruit their students into the Graduate School.

As a professor of African American studies, how important is it to elevate Black voices, particularly Black faculty, in higher education?

It is critically important to elevate voices of underrepresented and diverse groups in all spaces where whiteness is the default. The intersection of my rank, discipline and industry create the perfect storm for doing so with less consequence and pushback. It is important because our experiences — good, bad or indifferent — should be brought to bear on policy and decision making.

How do you hope your presence as dean of the Graduate School positively influences the greater CofC community, particularly students of color?

I can’t tell you enough how much representation matters. It sounds cliché, but in the eight months since my appointment I have been astounded by this reality. I was overwhelmed with the congratulatory messages that I received from underrepresented faculty, staff and students when the formal announcement of my appointment went out. Many of them I had not met, but they expressed their joy and celebration at seeing someone who looked like them in the position.

During Fall Alumni Weekend, Black alumni readily embraced me (a literal embrace) with excitement. Some knew of my appointment through the press release, while others did not. I introduced myself to one visiting alumna and she was overcome with emotion. I was invited into pictures with spouses and babies because she “had never met a Black woman dean!” Even out in the community, elderly church ladies and sorority members insist on “giving [me] a hug” and proclaiming how proud they are of my accomplishments. Most of them are complete strangers, but I understand the power of those moments.

It’s not that my career trajectory is particularly remarkable. Deanships are quite unremarkable in higher education, a normal part of the academic fabric. There is, however, an instant recognition that the seeds of hope planted during their generation now have strong roots and are yielding a mighty harvest despite obstacles of race, class and gender oppression. And we smile wide and hug up on each other knowing an unspoken joy in this. There is a popular meme on social media that says, “I am my ancestors’ wildest dream.” It beautifully articulates that exchange. The influence of representation is powerful — not only for students of color, but also for the communities from which they come. It can turn the tide of a historically challenged reputation for prospective students and families. I can only hope that for our campus, diversity in leadership gets normalized. That it pushes us to a place where we no longer have any “firsts” to celebrate because we have culturally shifted to make our institution authentically diverse and inclusive.

We should be including and discussing Black history throughout the year, not just in February, but what role do you feel Black History Month plays in elevating Black stories and Black issues?

Acknowledging Black history and achievement elevates and often teaches us all the wonderful and incredible ways African Americans (and global Black populations) have contributed to our society, culture and history. It also bears witness to the ugly truths of our existence in this country. And all of it is valuable. It gives us what Western histories deliberately omit to overstate the prevalence of whiteness. If we (here I’m invoking the royal, Black “we”) believed what is taught in public education, people of African descent would have a lot of shame and very little to point to in terms of our contributions to our nations and cultures. And there are many Black-skinned people who do internalize this indoctrination. Our history is often debased and trivialized to enslavement, and even that history leans its bias toward an infallible whiteness.

Black history is our resistance to the conscious miseducation of the masses, to play on the intellect of Carter G. Woodson, the founder of Black History Month. Black History Month is a focal point; it amplifies the voices and visionaries of the Black experience both ancient and contemporary. But, as you note, Black history moves so far beyond the 28 days in February. We will never stop recovering our stories. In fact, scholars like Tiya Miles (who recently won the National Book Award for All That She Carried) are using new historical approaches and multimodal scholarship to retrieve even the most mundane circumstances of our erased past. The power, however, lies in the recovery precisely because for so long institutional racism deemed Black lives unknowable and unworthy of study. Black History Month is when we speak loudest in our dissent; we reject the premise that Black folk belong on the back burner of the American enterprise; we are inextricably tied to that enterprise, and we will not allow anyone to tell us otherwise. We reject the shame and erasure public education tries to impose on us; Black History Month is our proverbial soapbox.