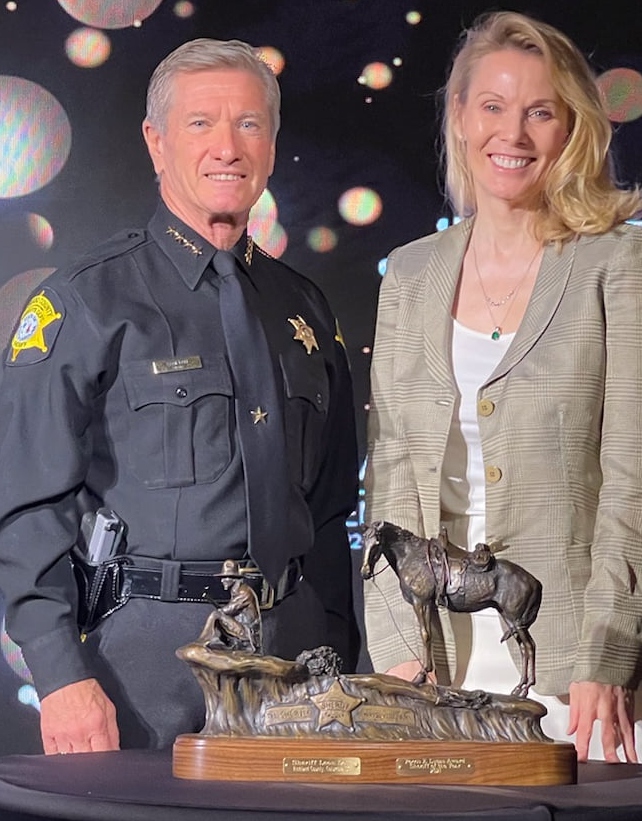 Leon Lott, the sheriff of Richland County and a Lander University alumnus, and Lisa Broderick, executive director of Police2Peace, are shown with the National Sheriff of the Year award. Lott is the first sheriff from South Carolina to receive this award from the National Sheriffs’ Association.

Lander University alumnus Leon Lott has been named Sheriff of the Year 2021 by the National Sheriffs’ Association (NSA).

He is the first sheriff from the Palmetto State to receive the NSA’s Ferris E. Lucas Award, which recognizes a sheriff for contributions to improve the Office of Sheriff at local, state and national levels.

Lott, sheriff of Richland County (S.C.) since 1996, has more than 40 years of law enforcement service. He earned a master’s degree from Lander’s nationally recognized Emergency Management program in 2016.

“This is a tremendous honor both personally and for the state of South Carolina,” said Lott of NSA’s top honor. “To be recognized by this 81-year-old organization with a history going back to the 19th century, in which some of the most important local and national law enforcement policy has been legislated, makes it all the more rewarding to me.”

In addition to the national award, Lott was named the S.C. Sheriffs’ Association’s 2021 Sheriff of the Year. This marks the second time that he has received the state award.

In 2018, Lott was promoted to the rank of Brigadier General, Commander of the S.C. State Guard, a national model for emergency preparedness and disaster response. In this role, Lott commands approximately 1,000 guardsmen, including retired and former U.S. military members, engineers, medical professionals, attorneys and law enforcement officers.