Brown and Sheldon broke a Lander team record for five fish with their catch of 27.4 pounds, and three other Lander teams participating in the event placed in the 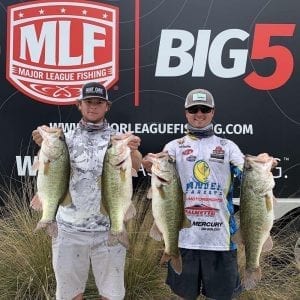 The strong showing moved Lander up in the national rankings, from #34 to #28. Lander’s fishing team is the #1 team in the state.

The successful day fishing came as no surprise to Ross Parris, a marketing and management major from Inman, who serves as team president.

“Lander is very good at fishing. Not a lot of people know it, but we’ve got some good guys,” he said.

“We began with four guys and quickly grew with the support of Dr. Cosentino and Andy Benoit,” said past president Trevor Stewart, a 2018 graduate who is currently pursuing an M.S.M. degree from Lander. Stewart said that he and past president Collin Smith, a 2017 graduate, “worked to recruit and grow the team within the local area and achieved recruits from outside of South Carolina as well.”

Parris, who learned how to fish from his father, a frequent participant in tournaments, was one of those recruits. As a high school student, he began receiving calls and emails from team members, and after an event in Spartanburg where he met Benoit, former vice president for Enrollment Management and advisor for the fishing team, he decided that Lander was where he wanted to be.

As a junior, Parris assisted former president Tyler Lusk, and he was elected president by the 26 members of the bass fishing club at the beginning of his senior year.

There are different schools of thought about how to fish. Some anglers head immediately for open water, but Parris takes a different approach. 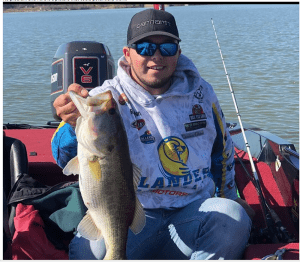 “I’m more of a power fisherman. I like to beat the bank and fish hard,” he says.

The secret to success, according to Parris, is some good fish-finding equipment. “If you don’t have it, you’re a step behind,” he said.

It’s lure-fishing, strictly. “There’s a lot of complexity in how you fish your bait, in the movements your bait makes, in the way it comes through the water,” he said.

The position of the boat, relative to where the fish are, also matters. “It’s things like that that separate people from being good and being just okay,” he said.

Parris wants to be very, very good. His “number one goal,” he said, is to fish professionally.

“The professional fishermen, they fish all the time. If I had the money and time to fish every day of the week like they do, I could be as good as they are. I believe that wholeheartedly.”

After the catch is weighed, he returns it to the water. It hardly ever becomes dinner. “I love catching them, but I really wouldn’t mind if I never ate them again,” he said.

He identified Britt Myers and Tyler Anderson, of Lake Wylie; Whit Edmonds, of Columbia; and Bobby Long, of Greenville, as some of the better anglers on the team, but that should not be construed as an inclusive list.

It won’t be long before Bearcat anglers are wetting a hook again, as they are participating in a Bassmaster College Series event March 5-6, on Lake Hartwell. They like Bassmaster tournaments because they are competitive, multi-day affairs.

“They have the meetings the night before, and sometimes they’ll serve you dinner,” he said.

Lander expects to send at least six boats to every Bassmaster event it participates in this year. Fishing like that costs money, and Parris expressed gratitude to the team’s sponsors, for making it possible.

“If it wasn’t for them, we would not be able to travel and get places to stay,” he said.

Friends of Lander interested in supporting the fishing team should contact Mike Worley, vice president for University Advancement and executive director of The Lander Foundation, at 864-388-8350.

The bass fishing club is “one of Lander’s crown jewels,” according to Dr. Todd Gambill, who took over as vice president for Enrollment Management following the departure of Benoit, who accepted a position with Texas A&M University.

“We have great students on our fishing team. They are very successful in competitions and they are wonderful students and community members,” he said.

Opportunities exist to grow the team by establishing scholarships for future team members.

“We know that there are high school students looking for an opportunity to fish competitively while getting a terrific education,” Gambill said.