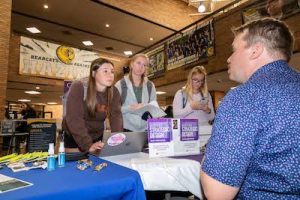 Lander University students thinking about continuing their education beyond a bachelor’s degree learned about some of their options on Wednesday, Oct. 5, at this semester’s graduate school fair.

One of the 19 schools participating in the fair, sponsored by the Office of Career Services, was Lander itself.

“We want to make sure Lander students know that Lander has graduate school options for them,” said Professor of English Dr. Lloyd Willis, dean of Lander’s College of Graduate and Online Studies.

“They can all be completed in two years or less,” Willis said.

Students have been taking notice.

Personal attention is a big part of the reason that Presbyterian College’s School of Pharmacy is recognized as “one of the top schools in the state,” said Acting Dean Kayce Shealy.

According to Shealy, the pharmacy program’s enrollment target is only “50 or so. That small environment allows us to do more one-on-one with students and ensures that we’re preparing them for their future practice,” she said.

Shelley Ceigler, graduate enrollment specialist for Charleston Southern University, was in town to promote offerings such as C.S.U.’s MBA and Master of Science in Physician Assistant programs.

“A bachelor’s degree is fantastic for giving students a foundation,” Ceigler said, but “to set yourself apart, to be able to advance in a field, you need to have those extra studies, that graduate program, maybe even a doctorate.”

Wright Culpepper, director of Recruitment and Student Affairs for the Graduate School at the University of South Carolina, is a regular participant in Lander’s graduate school fairs.

“I started this position in the spring of 2013, and I’ve come to Lander at least once a year, sometimes twice, every year, except for the COVID year,” he said.

The University of South Carolina has more than 240 graduate programs. Culpepper said his goal is to “get students off of my doorstep and face to face with the programs that they’re interested in.”