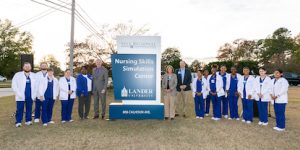 More than 100 participants from Self Regional, Lander University and the surrounding Greenwood community gathered on the front lawn of what was formerly known as the American Legion Building Tuesday, Nov. 22, to watch as Lander and Self Regional began the next chapter of their decades long partnership.

That building will now be known as Lander’s Self Regional Healthcare Nursing Skills Simulation Center (NSSC), and as part of the grand opening ceremony hosted by the University and the health care provider, a new sign was unveiled that displays the names of both institutions. Meanwhile, Representative John McCravy and Senator Billy Garrett presented Lander and Self Regional with a resolution on behalf of the Greenwood County Legislative Delegation. These tributes recognized the role the new center will play in providing quality clinical training to the next generation of health care professionals.

“In 1955, there was a significant gift from the Self Family Foundation to establish the Self Memorial Hospital Department of Nursing at Lander College,” said Dr. Holisa Wharton, dean of the School of Nursing at Lander. “Here we stand 67 years later, having grown from Self Memorial Hospital to Self Regional Healthcare; and from Lander College to Lander University. Names have changed, services have expanded and programs have come and gone. Still today, we’re here to commemorate the expansion of a historical academic practice partnership between Self and Lander.”

The NSSC, which opened in January, features the some of the most advanced resources in nursing education. The center contains four teaching-learning labs, each of which can accommodate up to 80 students per session, and three practice labs that students can use for group practice sessions or clinical skills remediation. Bedside computers simulate virtual patient encounters and electronic health records, giving students the chance to practice in an environment that mirrors what they may experience in an authentic health care setting.

Currently, Lander University has nearly 700 students enrolled in its nursing program. Dr. Carol Stefaniak, chief nursing officer at Self Regional Healthcare, said that kind of number makes chief nurses across the country “want to do back flips.”

“I know that you’re coming out of [Lander University] well prepared, and that you’re going to be able to take great care of our patients,” Stefaniak said. “We would be proud to have you at Self Regional.”

Naming rights to the NSSC were included as part of a monumental endowed gift from Self Regional to Lander announced earlier this year, which enhances nursing education at Lander and addresses a nationwide nursing shortage by creating a pipeline of nurses for Self Regional. The Self Regional Scholars Program provides substantial scholarships to 15 of the highest performing junior-level nursing students in Lander’s School of Nursing. As seniors, these Self Scholars are automatically accepted into Self Regional’s highly successful externship program. Preference is given to students from Greenwood, Laurens, Edgefield, Abbeville, McCormick, Newberry and Saluda counties (GLEAMNS). In exchange, Self Scholars agree to one year of employment at Self Regional after graduation from Lander.

“Our commitment from Self Regional to the nursing students at Lander University is that we will be a place where you will feel at home,” said Dr. Matt Logan, president and CEO of Self Regional Healthcare, adding that one of the major goals of Self Regional is “to be the best place in our area that you can get care.”

“We want you to feel at home when you come do your clinicals with us, [and] we want you to come work with us when you finish with your training,” Logan added.

Lander University’s president, Dr. Richard Cosentino, reminded the crowd that the grand opening of this facility wasn’t the final destination—as part of the enduring partnership between the two institutions, Self Regional Healthcare’s name will also appear alongside Lander’s when construction is complete on its forthcoming, state-of-the-art nursing building. Initial funding for the project was awarded by the South Carolina General Assembly in 2021, the first time in nearly a quarter century that the state awarded funds for a new building on Lander’s campus. Cosentino noted that the generosity from both the legislature and Self Regional, demonstrates confidence in the graduates produced by Lander’s School of Nursing.

“Self Regional Healthcare provides world class health care to our community, region, our state and beyond,” Cosentino said. “What a great day for Greenwood, and what a great day for the GLEAMNS area: two great institutions working together, partnering to serve our region.”