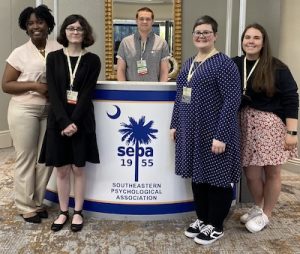 A contingent from Lander University made a favorable impression at the Southeastern Psychological Association (SEPA) Conference, held from March 23 to March 26, at Hilton Head Island.

A second presentation by Southard-Dobbs and her students, “Commonality Analysis of Event Centrality, Perceived Injustice, and Post-Traumatic Stress” was also nominated for the Early Career Research Award competition, but SEPA rules allow only one paper to be considered for awards.

Students in Southard-Dobbs’s research lab actively contributed to both projects, and all four — Seren Krishingner, Rebekah Marcengill and Gretchen Wanning of Greenwood, and Alicia Fulton of Kingstree — accompanied Southard-Dobbs on the trip.

“I believe I was the only presenter among the finalists who had student co-authors, which was really exciting for us,” she said.

She said that the students “represented Lander University and our Stress and Cognition Lab so well at this large, regional professional meeting. They organized formal meetings and conversed with faculty and graduate students from other institutions. They engaged with lots of presentations and took advantage of the opportunity to learn about topics outside of their usual coursework at Lander, and they did a fantastic job of presenting our lab’s research to fellow SEPA attendees.”