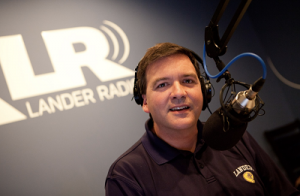 While former Lecturer of Media Paul Crutcher might not be physically present on Lander’s campus anymore, his colleagues have ensured his legacy will live on through the establishment of a scholarship named in his honor.

“I was speechless, to be honest, when I heard the news,” said Crutcher, who in addition to teaching in Lander’s Department of Media and Communication also served as general manager of XLR, Lander’s campus radio station which Crutcher worked with colleagues in the department to found in 2009. “I am sincerely honored that this extension of generosity with my name attached is going to benefit Lander students for years to come.”

Throughout his tenure at Lander, Crutcher has seen many students struggle to balance part-time jobs with full class loads, in addition to getting involved with co-curricular activities on campus. Academic success has always been a concern for him, and he is relieved to know that, through the Paul Crutcher Scholarship for Media and Communication, these burdens will be eased for some of the department’s hardest working students. “I know firsthand the difficulties of trying to cover the costs associated with higher education,” said Crutcher. “If this scholarship can help pay for some expenses and lighten the load of some of our students, that is my hope.”

Of Crutcher’s many attributes, the one which received the highest praise from his colleagues is his devotion to his students. “Above all else, he was our students’ biggest cheerleader, and kept an open door policy for all,” said Monique Sacay-Bagwell, professor of speech and performance. “He is a supportive, generous and kindhearted man. He will be sorely missed on campus.”

Dr. Robert Stevenson, professor of journalism and former department chair, echoed Sacay-Bagwell’s comments. Stevenson and Crutcher collaborated on several projects over the years, most notably the 2008 documentary on the University’s founder, The Reverend Samuel Lander. “Paul has left a legacy of talented, experienced and motivated radio personalities in his wake,” said Stevenson. “It is very fitting that we honor his accomplishments with this scholarship.”

In addition to XLR, Crutcher also helped found the Lander University Film Festival, which celebrated its tenth anniversary in 2019. Laura Hester, associate professor of media and communication and current department chair, commended Crutcher for his efforts with the annual festival, and “for giving our students an opportunity to create and compete in filmmaking.”

“Lander, and the film festival, won’t be the same without him,” added Dr. Misty Jameson, professor of English and film studies, who enjoyed working with Crutcher on the festival since 2011. “Paul is someone who gets things done—and somehow manages to do a little of everything—but makes it look effortless. It’s no wonder why all his students seem to love him.”

One of those former students, Garrett Brooks, was named one of the first students to receive the Paul Crutcher Scholarship. Brooks, a mass communications major from Rock Hill, reflected on Crutcher’s impact on his own studies at Lander, saying that “Paul always has your back. If you wanted to do something, he would support you, and if you didn’t know where to begin, he’d help you take the first step.”

“Simply put,” Brooks added, “he was one of the best Lander has to offer, and without his guidance, I wouldn’t be where I am today.”

When asked what he’d miss most about Lander, Crutcher listed dozens of activities and events he’s participated in over the years to support the hundreds of students he’s helped prepare for the workplace and the world, from mentoring student DJs with XLR, to supporting the Lander Bearcats as a courtside announcer when the Bearcats captured a conference championship. At the heart of Crutcher’s service to Lander University were his students.

Interestingly, though, there was one item on his list that was not student-related. That was, “the specific way one of the trees outside the Carnell Learning Center blooms with color in early spring.” But Hester confirmed that, like this tree, the Paul Crutcher Scholarship would be instrumental to helping students bloom into successful young professionals of communication and media.

“Paul has the spirit and the work ethic to put a vision into motion,” Hester said. “We’re very excited to be able to offer this scholarship as a way to honor Paul’s contributions to our University.”