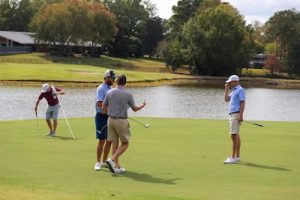 With 121 players gathered to play 18 holes of golf at the Greenwood Country Club, the Martin-Sims Golf Classic was much more than a day on the golf course.

The tournament, designed to bring Lander University alumni and students, community leaders and golf fans together for a day of sport and fun, supports the University’s golf program. Named for Lander alumni, the late Rudy Sims and John Martin, who were passionate golfers, the Homecoming Week event came on a day when blue skies provided a perfect canopy over trees beginning to burst with fall colors. 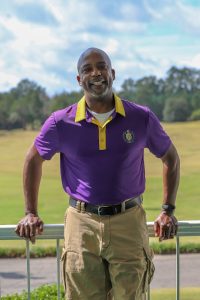 Lander alumnus Warren Bacote ’89, of Darlington, said he wouldn’t miss the tournament or the opportunity to be with his University friends. “It’s Homecoming 2022. I’m a ‘perpetual returner’ to Lander for Homecoming. Wild horses couldn’t keep me away.”

A retired U.S. Army colonel, who completed tours throughout the Middle East during his career and also served on military bases in the United States, Bacote majored in political science at Lander and was in the University’s ROTC program, which he called his “second major.” After working as a trooper for the S.C. Highway Patrol, Bacote turned his attention to military service.

“I wanted to make a difference for our nation,” he said.

During his days at Lander, Bacote said the University didn’t have the same recognition that it does today. “People didn’t know much about us outside of South Carolina. Now, Lander has reached an international level of status. Our alumni are having an impact across the globe.”

Harold Crawford ’74, of Columbia, who was a Lander student during the University’s 100th anniversary, said the campus “has had a lot of positive changes and growth,” while still maintaining its “hometown and family atmosphere.”

Crawford, a member of the Lander Alumni Association’s Board of Directors, said the University plays a significant role in Greenwood, which was his own hometown. “Many people come here to school and never leave. They become a vital part of this community, and their contributions to Greenwood are great.” 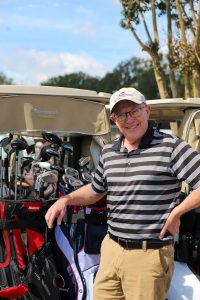 In many ways, this is because of the strength of Lander’s academic programs, Crawford said. “I’m very impressed by many of our programs, nursing, education and business, for example. And I’m impressed with the number of programs available for today’s students. Lander has been and continues to be a place of growth. It is thriving.”

For Steve Wohlwend ’81, president of The Lander Foundation Board of Directors, the tournament and time spent with alumni and friends were a way to celebrate the University’s Sesquicentennial year. “Looking back 45 years ago, there is a marked difference in our campus. I think many of today’s students are smarter. Our alumni are successful in many different areas. An education here is affordable, and there is great enthusiasm across campus.”

Mark Riddle, Lander’s head golf coach, said the Martin-Sims Golf Classic provides an important year-round boost to the golf program. “The tournament has always been used to help Lander Golf fund scholarships and to help with our Lander Golf budget. It is an amazing event.”

Ludvig Danielsson, a member of Lander’s tennis team, also received a Closest to the Pin award.

The tournament’s co-hosts were Susan Sims, Mark Riddle, and the Lander Alumni Association.