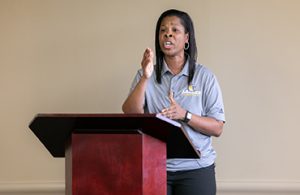 DeCole Robertson, assistant coach and recruiting coordinator for Lander University’s women’s basketball team, knows something about success, having played a major role in leading the team to two recent Peach Belt Conference championships, an NCAA Division II South Region championship, and the first Final Four appearance in the history of the program.

On Thursday, Feb. 24, in a presentation sponsored by Lander’s Diversity Advisory Council, Robertson, who has a bachelor’s degree in business from Anderson College and a master’s degree in sports management from Liberty University, talked about “What It Takes to Win.”

The first key to winning, she said, is having a vision. “If you don’t know where you’re going, you’ve got no game,” she said.

Passion is another component of winning. “Passion is what pushes you through the hard times,” she said.

Acceptance of one’s role is also necessary. She works well with Head Coach Kevin Pederson, she said, because she accepts her supporting role.

“If I stay focused on what I’m doing instead of worrying about what he’s doing, we can be great together,” she said.

Accountability, and not making excuses, is another ingredient of success. If a player was recruited as a shooting guard, she said, it is her responsibility to score.

Relationships are also important. If she had not known Pederson, she “never” would have left her previous coaching job to work at Lander, she said.

According to Robertson, the keys to winning are as applicable to life as they are to sports, and she encouraged those in the audience to adopt them as their own.

“If you do, how can you not succeed?” she said.