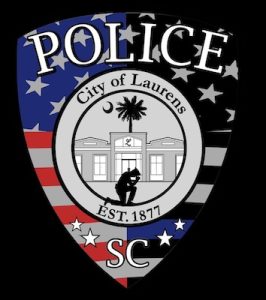 The Laurens Police Department proudly unveiled their new Laurens Police Department (LPD) uniform shoulder patch on Thursday.
Uniform patches not only represent the agency but are symbols of pride and are unique to Police agencies worldwide. Over the last six weeks, Chief Grounsell and  LPD officers and support staff came together as a team to design the new patch that represents not only their new brand, but their vision for the future as well.
The new uniform patch is packed with symbolism and will be proudly displayed on uniforms, vehicles, and department wide branding. This patch has many representations depicted in the overall design. The City of Laurens is represented by the new police department building, which is currently under construction. In addition, the establishment date of the police department is written on the patch (1877). The state is represented by the crescent moon and the palmetto tree. The nation is represented by the American flag in the left rear background of the patch. The brotherhood & sisterhood of law-enforcement is represented by the thin blue line flag on the right rear background of the patch. The stars represent guidance and protection for our officers and the community. In addition, a tribute to fallen heroes (past, present, and future) is represented by the silhouette of the kneeling officer.
Posted in Laurens County BUZZ